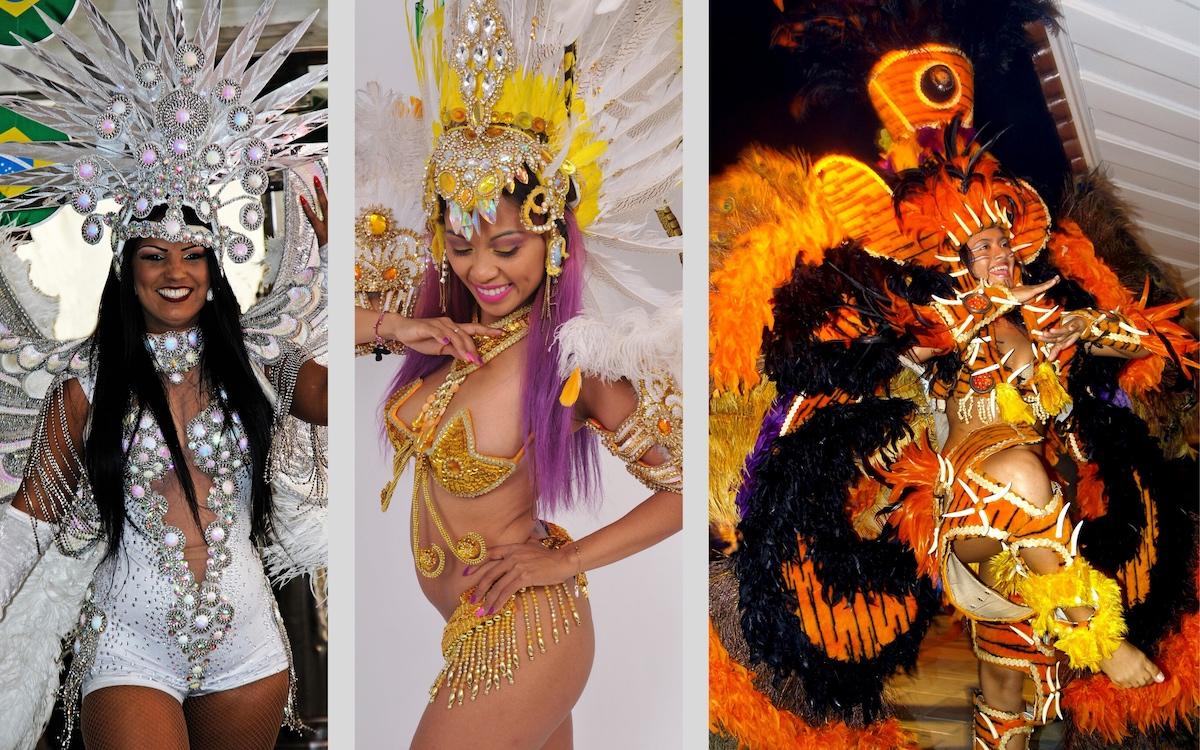 Brazilian carnival, known in Portuguese as carnival do brasil, is an event that takes place all over the country.

So, the carnival takes place around Ash Wednesday, as it starts the Friday before that.

It is a unique festival that makes it a perfect time to travel to Brazil.

So, this article is going to give you some info on the subject.

Because Brazil is a predominantly Catholic country, as is most of South America, the carnival has a religious history.

It kicks off the Lent season, which includes fasting and lasts all the way to the Saturday before Easter.

However, in Brazil, it’s one of those things where Catholicism meets indigenous culture.

“It is so much more than Catholic,” says Fernanda, a travel expert in São Paulo. “Over the centuries, the carnival has become very African in nature,” she adds. “The music, the dancing, the colorful bodies, it is incredible.”

For example, in areas with large Black or mixed peoples, it takes a colossal party tone.

In Rio de Janeiro, for instance, where the majority are people of color, the carnival is very festive, says Fernanda.

Because it is big business, as well as cultural, it is both organized and disorganized. For example, Escola de samba, or Samba schools, have organized and colorful parades. The parades end at Sambadrome, known in Portuguese as sambódromo da mar uês de sapucaí.

On the other hand, there is a somewhat disorganized festive mood with the bloco carnavalesco or carnival blocks. Because these blocks are in many neighborhoods, they can number in the hundreds.

“It is tough to know exactly how many of them there are,” says Fernanda. “I would say the most famous is the Cordão Da Bola Preta.”

So, Fernanda explains that the block was founded in 1918 and attracts over a million people for its party.

“Because it takes place on Saturday during carnival, it makes sense that it is in Centro,” she says.

Centro is the downtown of Rio.

So, Rio is home to a lot of famous blocks.

As a result, Rio currently holds the Guinness World Records for the largest carnival in the world.

So, what is the carnival experience like for the average Brazilian?

We asked Gerson, a multi-artist in Rio, to take us through some of his memorable carnivals.

Because carnival represents a time when you can be free from all of society’s expectations, it can be wild.

As a result, you will see many people dressed in unusual costumes.

“I love to dress up,” says Gerson, who lives in Rio but was born in São Paulo state. “All of my costumes have a connection with the things that appear in my mind,” he adds.

For example, he once dressed up as Gretchen, a famous singer, because he was writing her official biography.

Meanwhile, Fernanda says a lot of people dress up without thinking about it.

“For example, I like to just go with the flow,” she says. “However, I also know many people plan their costumes. No matter what, try to be unique.”

So, don’t be afraid to live out a wild dream.

Likewise, another element that prominently shows up during the carnival is otherworldly.

“I once saw a woman dressed up as God,” laughs Fernanda. “Anything goes in the carnival. You can be anyone or anything you want.”

Gerson, who at the time was on a popular television show, once dressed up as a ghost.

Ironic because he likes to say, “I love to live.”

“Because it really a time of tolerance, you can for sure dress up like you want,” says Fernanda. “For example, if you’re homophobic or sexist, somehow the carnival changes you. You feel a mood of ‘live and let live,’ I would say.”

In other words, the carnival is a time to live out your fantasies, too!

Because it is a party, the carnival-goers dress the way they want.

For example, once Gerson went to the carnival with led lights on him.

“I always want costumes that make sense for me,” says Gerson. “Sometimes, they only make sense to me.”

So, Fernanda says to expect a lot of personal touches to costumes.

“For instance, someone might have a picture of a dead loved one in his or her costumes,” she says.

Meanwhile, Fernanda suggests asking the person if they are wearing a costume that piques your interest.

“Because we Brazilians are very friendly,” she says. “It will be no problem at all. As long as you don’t make fun of someone’s creation or choices, it is all fine.”

Besides the number of locals who have roots elsewhere, some even from multiple places, Brazil is a global destination.

“Similarly, we get a lot of international tourists,” says Fernanda.

For instance, Brazil had a record number of tourists in 2017—beating both the Olympics and World Cup visitors.

As a result, people like Gerson meet a lot of foreigners—some for personal reasons and others as collaborators.

For example, I met Gerson, pictured above with Norwegian and Swedish (see underwear) flags, when I photographed him for my book, “Rio.”

In fact, I met Gerson through a friend who met him during the carnival!

So, don’t be afraid to talk to Brazilians!

Because of the music, dance, and colors, one must keep in mind that the carnival is artistic above all else.

“There is no better artistic festival than carnival,” says Fernanda.

As a result, the Brazilian carnival is a top-rated tourist destination, even for Brazilians!

For example, Salvador receives around a million people during carnival, and about 80% of them are Brazilians, says Fernanda.

“Because for us Brazilians, Salvador’s carnival is still the most colorful,” explains Fernanda. “People travel from far distances to see it. For instance, most Brazilians dream of seeing it at least once in their lifetime.”

In other words, make sure to see the carnival in different parts of Brazil for good measure of experience.

So, now that you have heard the “fun” side of it, Fernanda wants to remind you of some things.

“Because it is a party, there will be a lot of alcohol,” she says.

As a result, people get drunk and can be too “friendly,” she says.

Meanwhile, the cities provide portable toilets, as you will drink a lot of beer.

“However, there are high penalty fees for urinating in public,” says Fernanda.

Meanwhile, Fernanda reminds you to keep your valuables outside of public view.

For instance, she suggests leaving expensive items such as jewelry back in your hotel room.

Because, even though it is a fun party, the carnival attracts criminals, too.

“It is not worth it,” warns Fernanda.

Finally, Fernanda wants you to be aware of carnival history. For example, she says that samba, the music that dominates the scene, is rooted in Africa.

“It was something enslaved Africans brought to Brazil,” she says.

Therefore, make sure you have a broader understanding of the festival.

No doubt, the Brazilian carnival is fun!

However, keep in mind that it has different meanings for different people.

For example, Fernanda, our tourism expert, comes from an objective perspective.

On the other hand, Gerson, an individual who enjoys carnival, has a more personal approach.

Because you got a balanced view, you are now ready to go and enjoy the Brazilian carnival.