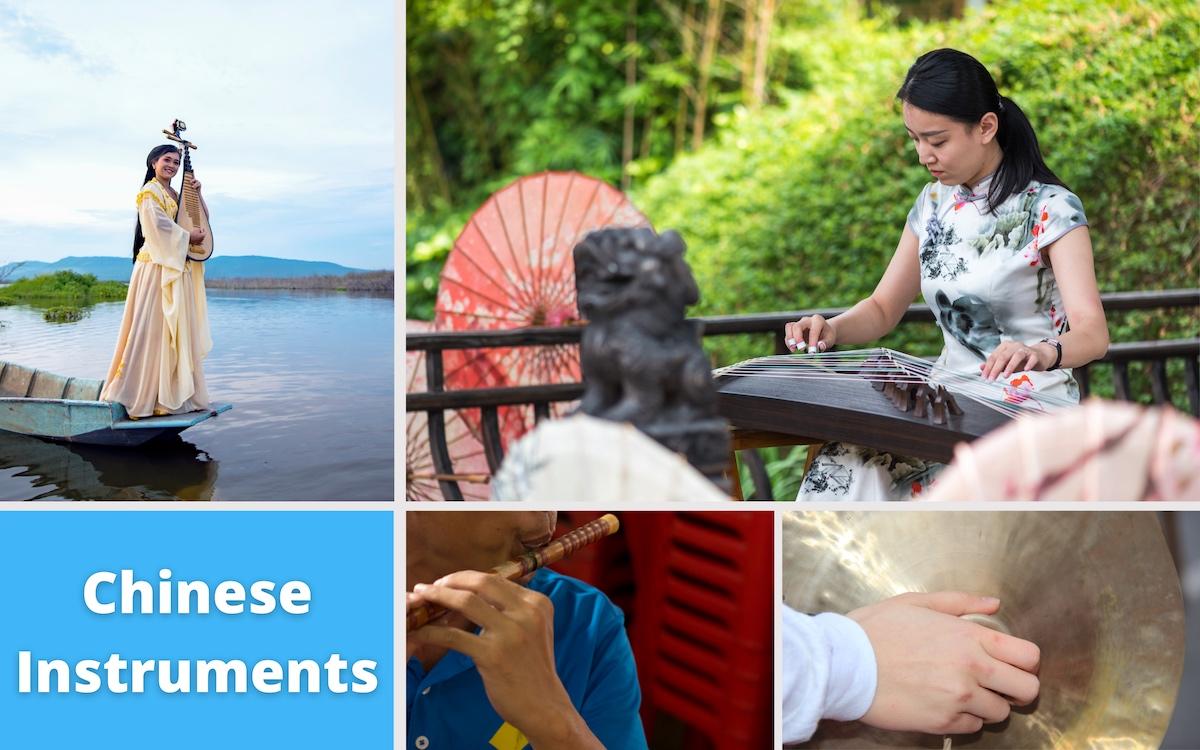 Chinese instruments include ones that are similar to the guitar, the violin, flute, trumpet, and zither. This article explores the history, songs, and musicians.

China and its people have enjoyed music for thousands of years, and Chinese instruments are plentiful even today.

Traditionally, the instruments were divided into eight categories.

That is, Chinese instruments were connected to nature, animals, and products made by humans.

In other words, what the people had access to!

As a result, and you will see this across this guide, not every Chinese instrument is “Chinese.”

Chinese instruments are ancient, as you already know. However, what many non-Chinese do not know is that there is a method for Chinese music.

For example, around 2,200 years ago, some Chinese scholars were discussing issues important to their communities.

“The discussions circled on many subjects,” explains Zhao Yang, a musician here in Beijing. “From the reality of life to heaven’s ways,” he adds.

As a result, we got the huáinánzi, a collection of writings about those issues.

Meanwhile, according to John S. Major, an academic expert on East Asian history, the huainanzi gives us a clue about music.

One of the oldest Chinese instruments is the dízi, a bamboo flute. According to the US Department of Energy’s Brookhaven National Laboratory, the dizi dates back to at least 9,000 years.

“The dizi has a special place in Chinese music, especially traditional music,” explains Zhao Yang. “For example, the dizi is usually used to depict a natural phenomenon in plays.”

Like the western flute, the dizi is held horizontally, and six fingers are used to manipulate its holes. The dizi has six holes, which are placed at even distances. It also has a blowhole, as you would expect.

Watch Tang Junqiao play the dizi. She is one of the more well-known players in China and beyond. For example, her music was featured in the 2000 Hollywood film Crouching Tiger, Hidden Dragon.

The dizi is a beautiful flute to play and listen to!

How to Play the Dizi

So, are you curious to learn how to play the dizi? Zhao Yang says that the dizi is not so easy to play, even if it seems easy.

“Like any other instrument, it has its difficulties for beginners,” he explains. “The best thing to do is to find a teacher. In China, they are everywhere, but I don’t know in other countries.”

In other words, don’t let the effortlessness of players like Tang Junqiao fool you; this is a musical instrument.

So, to master it, find a master!

Meanwhile, if you are impatient and want to learn some quick tips, try Dora Wang.

Dora Wang is part of the New Canadian Global Music Orchestra or NCGMO. She was asked by the public television CBC to teach an introductory level.

The gǔzhēng is the Chinese plucked zither, another ancient instrument.

“Before the Warring States period (475-221BC), music was only for the royal family,” writes Yangfei Zhang in Macho Zapp. “The Palace had its own group of musicians to play music on important festivals or as a way of diplomacy.”

According to Yangfei Zhang, the earlier form of the guzheng was born at that time.

Now that we are in the second musical instrument, you should know that Chinese music is played from different regions.

Of course, each region is unique.

“The guzheng is played with northern or southern songs,” says Zhao Yang. “Each regional style or school has many styles within it,” he adds. “For example, there is a northern style and sub-region like Shandong’s old songs.”

Watch Ji Wei play the guzheng. She is a well-known guzheng player and teacher. At one point, she was in the press a lot because she introduced the guzheng to non-Chinese audiences.

In the video, she plays a classic song, chūshuǐ lián, or “Lotus Emerging Out of Water.”

The song is Hakkan, meaning from the south in provinces such as Guangdong, Fujian, Sichuan, Hunan, Zhejiang, and so on.

How to Play the Guzheng

So, like the previous instrument, the guzheng is not as “easy” as it looks.

“First of all, there is a reason why guzheng players wear fingerpicks,” says Zhao Yang. “It is hard on the fingers and would not be wise to play bare,” he adds.

In other words, there is an added physical need to be aware of.

“The picks also allow you to create the sound you want,” says Zhao Yang.

Needless to say, this is not an instrument you just pick up and play.

You need a real teacher.

However, if you are impatient about that, there are some resources.

For example, California-based e-commerce website Sound of China Guzheng Music has videos to help you start.

If there is one “national” instrument in China, it is probably the pípá, the most popular in the country.

And this is an ancient instrument, dating back to at least 2,000 years in the Han dynasty period.

Zhou Yi, from the Chinese Institute in New York, says that the pipa “was brought into China from Persia via the Silk Road. It has enjoyed wide popularity throughout its long history, especially during the Tang dynasty, and now again in our own time.”

The pipa has four strings and is played with plastic finger picks these days. Unlike a guitar, the pipa is sat upright on the lap.

Like other instruments, there are classical songs played with the pipa. Similarly, there are different regions.

Watch Wu Man play the pipa. She is probably the most well-known pipa player in the world today.

In this performance, she plays hàn gōng qiūyuè. The translation is like “Autumn Moon Over Han Palace,” a popular song from Shandong, the north.

The story is that it was a Han princess in a foreign land who invented the pipa!

However, Wu Man posted that in celebration of Liu Dehai, one of her teachers and one of the great masters of the pipa.

He died about a week before she posted that.

To see one of his performances of the same song, watch this video.

How to Play the Pipa

Of course, the pipa is not as “easy” as the guitar.

“However, it is not as difficult as some other Chinese instruments,” says Zhao Yang.

That is debatable because, as you will see below, a lot goes into playing the pipa.

So, of course, the recommendation is to find a teacher.

If you are impatient about that, then a good source is Carrie Wang, a Seattle based teacher of the instrument.

Speaking of Miss Wang, you really should see her performance of shí miàn máifú or “Ambush from Ten Sides.”

The song is a classic often played only by experienced musicians that tells the story of an ambush. Yes, it is a military song. It was for her graduation and was played in Xiamen’s famous Gulangyu Concert Hall.

Another interesting instrument is the suǒnà, which is at least 1,500 years old.

“It arrived in China from the northern provinces,” says Zhao Yang. “However, it is historically Central Asian instrument,” he adds. “Most people believe it came through the Silk Road.”

The suona is very similar to the Central Asian zurna, which is popular in Turkey and other Turkic cultures.

In China, it is popular in Shandong, Shanxi, and Henan, as well as other northern areas.

“Suona is very loud and is usually only suitable for outdoor performances,” says Zhao Yang.

As a result, it is popular in festivals and military parades.

Zhao Yang says the perfect use for the suona is when announcing something to the public. For example, he says there are still villages in the north where this is the case.

However, this has come under crackdown in some parts. For example, Fu Danni, at the Sixth Tone, reports that it is banned in parts of Shandong since 2016.

Watch Hou Yanqiu play the suona. In this video, she is playing at the famous Grand Chinese New Year Concert, which is organized by Wu Promotion. They are similar to the Hollywood agencies.

How to Play the Suona

So, the suona is just as tricky as any other.

And, because it is a very rare instrument, it is not easy to find a teacher.

In fact, the only lessons we could find are in Chinese languages.

It looks like this one is not going to be accessible at all.

So, the èrhú is another popular instrument with two strings and uses a bow to create the sound.

“This a very versatile instrument,” says Zhao Yang. “The erhu can stand on its own or join a small group of other instruments,” he adds.

Like the suona, the erhu originated in Central Asia, says Zhao Yang.

Because it uses python skin in one part of its body, the erhu is highly regulated in China.

“For example, you need to be certified to own one,” says Zhao Yang. “The same applies if you intend to take it outside of the country.”

Meanwhile, like most other instruments, there are some famous songs and musicians.

Watch Min Huifen play the erhu. She was the most celebrated erhu player in Chinese cultures.

In the video, she is playing jiānghé shuǐ or “Running River,” a very famous song from the northern provinces.

How to Play the Erhu

So, the erhu is actually more complicated than the previously mentioned instruments.

“If you play any kind of bowed instrument, it will probably be less difficult,” says Zhao Yang.

In other words, not easy for the average person.

If you absolutely cannot or are too impatient, then check out the lessons by Stone Li.

As you will see, there is so much to learn about this instrument.

Sometimes, we are talking about an instrument from 9,000 years ago, as is the bamboo flute case.

Other times, we are talking about a more recent instrument, like the erhu.

No matter what, it is essential to understand that music is in everyday life around China.

Whether birth, wedding, or funeral, music is present.

In this article, we gave you a lot of links to go and listen to and enjoy.

We also gave you some possible ways to “learn” on your own.

Of course, that is only in case you are not patient enough to find a teacher.

Find a teacher, if possible!