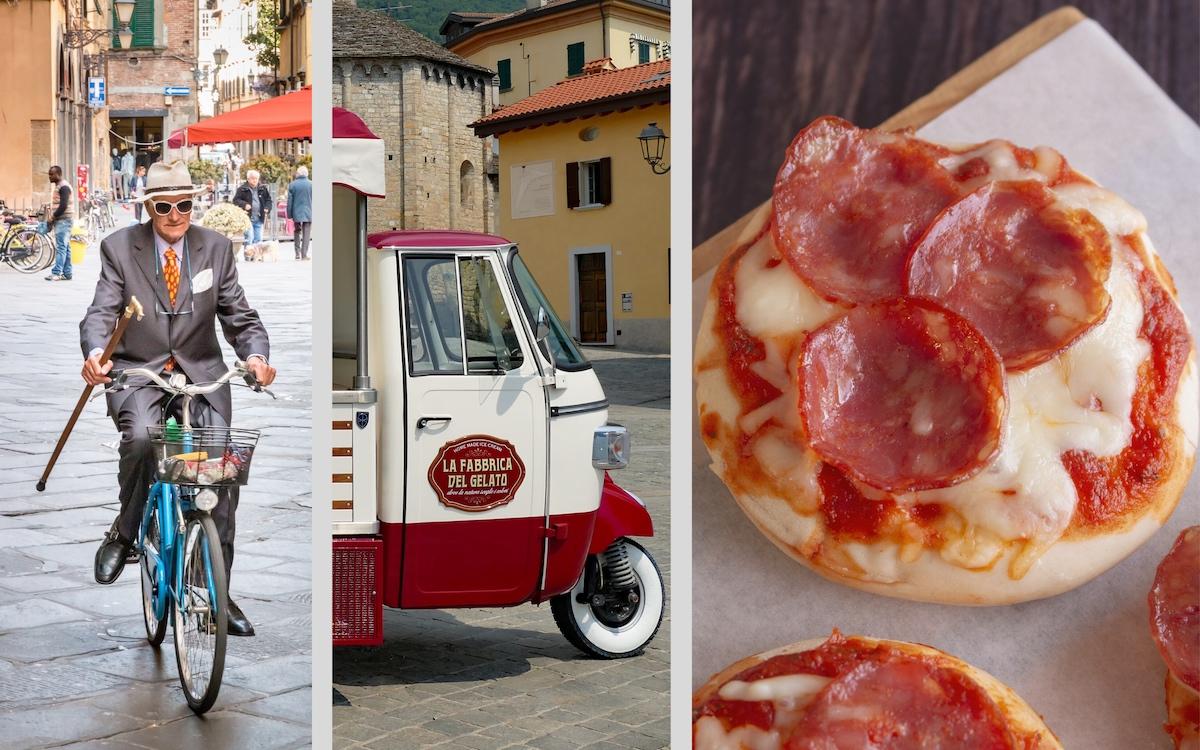 If you think of pizza and gelato, you’re like the majority of us.

However, as you will find out in this article, Italian street food is so much more.

For instance, did you know that street food was invented in Italy?

Street food, called cibo di strada in Italian, was invented by the Romans.

Meanwhile, we decided the information to you through a very credible source.

Meet Paola Bacchia, a traveler and food writer, who is the author of several Italian food books.

Her parents immigrated to Australia, where she was born.

Oh, yes, did we mention that she also takes people on a food journey to Italy?

So, let’s get to know her and her world!

The book, which was published in 2016, has 272 colorful pages and features 85 delicious recipes.

Because Bacchia is a traveler herself, she really brings the stories of this boot-shaped country to the pages.

She talks about the history, where she leads you through the history of street food in the country.

Likewise, the cultural elements attached to some of the foods are explored.

For example, you learn that pizzette (small pizza) is often enjoyed with a glass of wine in the afternoon.

Similarly, Bacchia’s book helps you to understand why certain ingredients are used.

For instance, instead of throwing leftover cheese during production, Italians turn it into another cheese called ricotta!

Meanwhile, the recipes are divided into logical sequences. For instance, you work your way from the breads to the meats and to the sweets.

In other words, the book is definitely worth it to have on your cookbooks shelf.

So, now that you’re familiar with the book’s basics let’s dive into the world of Italian street food!

Street Food Is Not Fast Food

In her book, much to our delight, Bacchia differentiates street food and fast food.

So, we asked her why people, especially in countries where fast food is rampant, confuse the two?

“When you order fast food, you expect to get it pretty much immediately,” says Bacchia. “We rush around, from task to task, and fast food fits in really well with this. It is produced efficiently, often high in sugars, fats, and always tastes the same (on purpose) no matter where you are. It is often eaten on the run, standing up, or sitting in a makeshift-type setting.”

So, some people confuse the two because there are similarities.

For example, Bacchia notes that “you might eat street food standing up, it might be (seemingly) prepared quickly, or it might be sold from a van. But that is where the similarity stops.”

“There is usually a story behind a traditional dish, a recipe handed down through the generations,” she explains.

How To Spot Street Food

So, now that you understand where the confusion comes from, how does an honest traveler spot Italian street food?

“Ask yourself, does it taste the same from one place to the next? Hopefully not,” says Bacchia. “There is much joy in the differences in foods that reflect different cultures and family recipes. And it was probably not prepared with factory-like efficiency either, but with local ingredients reflecting that culture.”

In other words, sometimes they may “look” the same, but if you pay attention, you will be able to know the difference.

More importantly, street food will come with some local and even family traditions!

So, one of the questions we had for Bacchia is about the geographical aspects of some street food dishes.

“These days pizza transcends all the regions (and even countries), but it was not always like that,” says Bacchia. “My mother, who was born near Venice, first tasted pizza in the early 1950s when she was in Naples when she was migrating to Australia,” she adds. “They just didn’t have it where she was from. They had a lot of polenta, but no pizza.”

Bacchia says that Italian food is regional, and it has to do with the people.

“From north to south, [people] are culturally quite different,” she explains. “The term ‘Italian’ food is, therefore, a bit of misnomer, especially pre the 1950s when there was little cultural exchange.”

“These days, you can find many foods that I consider street food all over the boot-shaped peninsula,” says Bacchia. “Apart from pizza, fried cannoli filled with ricotta are easily found all over, though they would most likely be called ‘Sicilian’ cannoli, as that is where they are originally from.”

So, as previously mentioned, street food can be very local.

Therefore, there are specific dishes Bacchia would have you try, depending on where you are traveling to.

“If you go to Palermo in Sicily, then you much try panelle (chickpea fritters), freshly fried for you by a street vendor,” says Bacchia.

So, this delicious dish can be served differently in different parts.

For example, in Sicily, it is generally served in a bun as a sandwich.

However, in Tuscany, and specifically in Livorno, they are eaten with eggplant.

Meanwhile, if you are traveling in Venice, Bacchia has a yummy recommendation for you, as well.

“Go to one of the cicchetti bars and order sarde in sa’or (sweet and sour sardines), which, if you love fish, are incredible,” says Bachia.

So, cicchetti bars, called bàcari locally, are small bars that are generally tucked in local neighborhoods.

Likewise, if you’re in Rome, Bacchia has a recommendation, too!

“Try the supplì al telefono, which are a kind of deep-fried rice balls,” says Bacchia. “[They’re] filled with mozzarella that looks a bit like a telephone line when you bite into it and pull the two halves apart,” she adds.

So, we also wanted to give you a peek into Bacchia’s own taste.

Therefore, we asked her if she would tell us her favorite street dish.

“My favorite varies from month to month,” she says, speaking like an authentic Italian with month-specific favorites.

Meanwhile, she says there is one that is making it to the top of the list currently.

“At the moment I love tigelle (I call them “crescentine” in my book), which are a type of pan-fried bread,” she says. “I make them at home when I have dinner parties, and everyone fills their own with various cured meat, marinated vegetables, and cheeses.”

“Tigelle is a real crowd-pleaser, easy to make, and not to be missed when you visit the town of Bologna.”

So, get Bacchia’s recipe for tigelle or crescentine from the SBS Australia website.

So, you learned that Italian street food is steeped in history.

For example, street food was invented in the Roman times in Italy!

As a result, street food is very regional, although some dishes have become national or even international.

For example, cannoli originated in Sicily but is now widely consumed across Italy.

Likewise, although pizza originated in Naples, it has gone global.

Meanwhile, cookbook author Paola Bacchia, who was born in Australia to parents who emigrated from Italy, knows street food.

For example, Bacchia has taken people on food tours to Italy and has an entire book on the subject.

So, to purchase her book Italian Street Food, get it from Amazon or where cookbooks are sold.