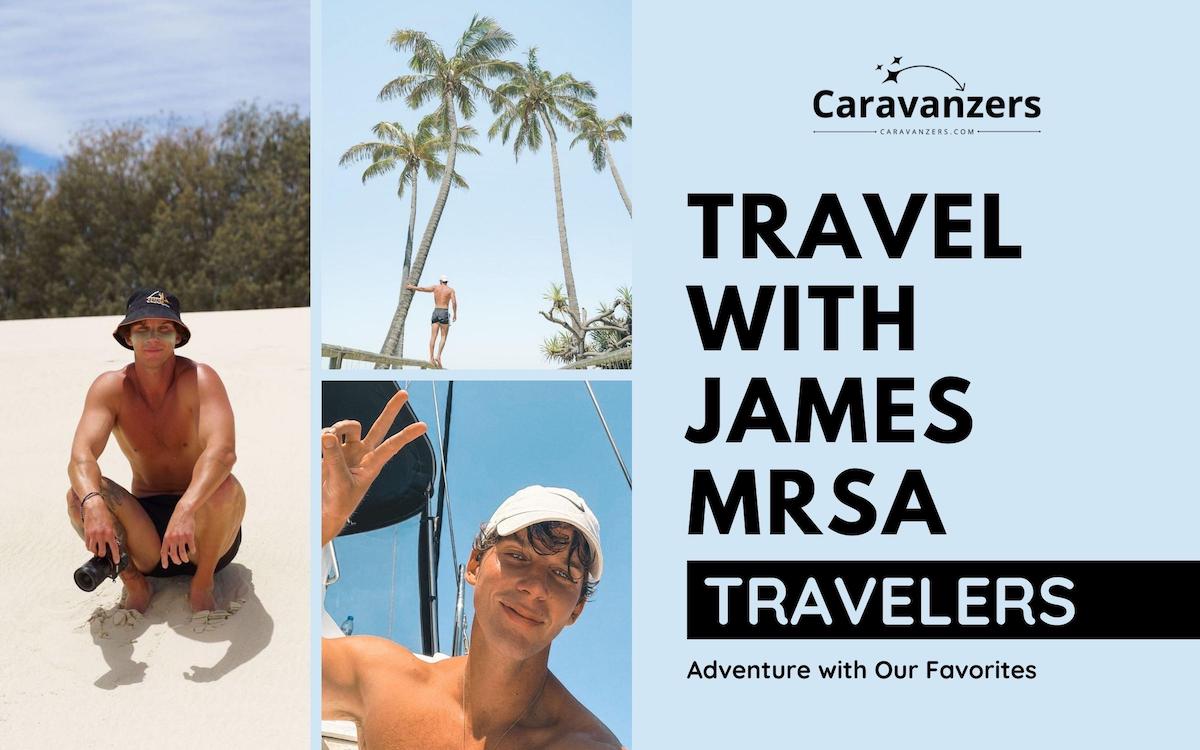 James Mrsa is a traveler and content creator from Australia. This man has been visiting so many beautiful destinations.

His social media accounts are filled with photos and videos of popular tourist sights.

We asked to get to know him recently, and he was super open about his experiences.

James Grew Up in Perth

James loves his hometown. “I grew up in Australia, a town called Perth on the west coast!”

Perth was on the list of cities we featured on our favorite beaches in Australia.

“Beautiful beaches, lovely people, definitely the place to raise a family one day,” says James of his city.

The city is the capital of Western Australia, a gigantic state that is about four times the size of Texas.

A great place to get a good view of Perth is on Mount Eliza, especially with the gorgeous Botanic Garden.

If you want to learn some history of the area, head to the Art Gallery of Western Australia at the Perth Cultural Centre.

Although Perth is in a huge state, one reason travelers like to go there is that it is really peaceful.

For example, the Perth metro area, known locally as the Greater Capital City Statistical Area (GCCSA), has a population of about 2 million.

In other words, it’s a big enough of a city but will give you that “small town” charm, depending on which neighborhood you visit.

So, yeah, a great place to grow up!

He Caught That Travel Bug Young

Many travelers will tell you that wanderlust––or the strong desire to travel––is something they felt at a young age.

And James is no different.

“I’ve always had a drive to travel,” he says. “It was a dream since I was younger, so as soon as I could, I saved up, got a GoPro, and left Australia.”

In our opinion, what makes James a great candidate as a travel influencer is that you can really see the joy on his face.

Recently, he posted a video on his TikTok where he turned the camera around and shared his breakfast view.

He happens to be in Rome, and the sight is none other than the Colosseum, one of the marvels of our world.

So, if you happen to be in a position to work with him, don’t hesitate!

Greece Has Stolen His Heart

What is Greece known for? Incredible history, beautiful beaches, and tons of islands.

Ios is part of the Cyclades, which are a group of islands in the Aegean Sea.

Like many parts of Greece, the island is home to some beautiful beaches, amazing landscape, and awesome culture.

“My favorite country is probably Greece,” James says. “The hospitality here is incredible! People are lovely, the food is amazing, and the beaches are mind-blowing.”

With about 30 million arrivals a year, Greece is one of the most visited countries in Europe––and for a good reason.

Islands like those in the Cyclades give travelers a chance to unwind and escape the routine stress of our modern lives.

There are direct flights to Athens from major US cities like New York, Chicago, and Atlanta.

Likewise, if you happen to live on the east coast in cities like the nation’s capital, Boston, and Philadelphia, you will also get direct flights.

A nonstop flight from US cities to Athens costs about $500.

Once you arrive in Athens and finish your historical sights, jump into a local flight and head to one of the islands.

Let’s get to know James a little more.

A favorite destination that he keeps returning to?

Barcelona is definitely one of our favorite cities in the world too!

“Blue is my favorite color,” James says, adding, “Being a lover of the ocean, this was only natural to me!

“I love anything tropical such as mangoes or smoothie bowls,” James says. “If I could live off of mangoes and coconuts for the rest of my days, I’d be a happy man!”

Well, isn’t he just made for travel?

Keep Up With James Mrsa

James is a traveler, but don’t forget he did get that Go Pro because he’s a content creator!

So, naturally, he says to expect more.

“Expect a lot more travel content,” he confirms. “Short, fast-paced reels that capture you and hopefully leave you feeling inspired!”

Both his TikTok and Instagram accounts are full of wonderful videos.

“Now that the world is open again, I have no desire to return home,” James says.

Meanwhile, what can we do to support his awesome life?

“I’d love for you to follow my journey on both Instagram and TikTok,” James says. “The more reach I have, the bigger the impact I can leave behind through my content!”