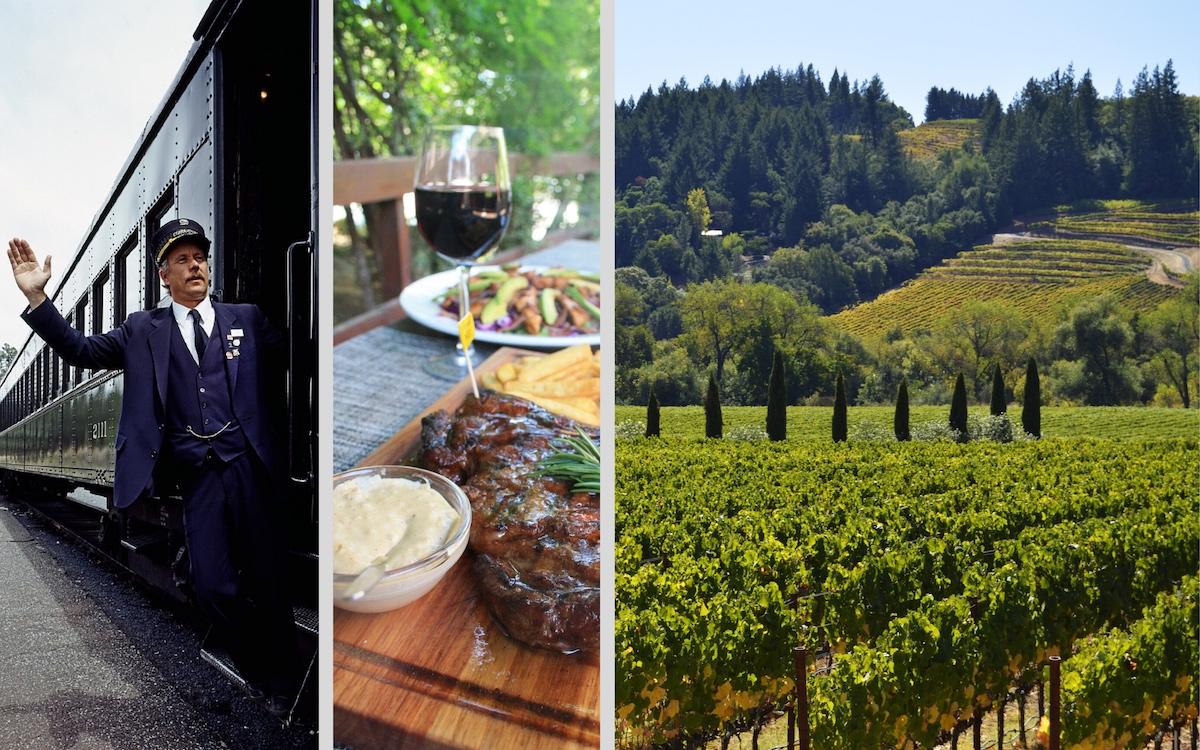 Not an American state.

However, Americans have been making wine since the 1600s, according to Randy Leffingwell, the author of California Wine Country.

For example, he notes in his book that early settlers in the United States “made use of native wild grapes to create their own wine as early as 1609.”

Meanwhile, there is no better wine region in the United States than California.

So, because the best Californian wines are produced in the wine country, these valleys are perfect places to travel to.

Mostly, it is because it is a diverse area.

For instance, the area is home to famous winemaking regions like Sonoma, Napa, and Mendocino.

“As a result of all of the diverse atmosphere, it is easy to make many types of wines here,” explains David Williams, a travel expert in the region.

There are nearly a thousand winemakers in the area.

As a result, this part of California attracts a lot of wine lovers.

So, what are some of the things to do there?

So, when we talk about “wine country,” we are talking about the six Northern Californian counties that make wines.

In other words, we are referring to Lake, Marin, Mendocino, Napa, Sonoma, and Solano.

But what about cities and/or towns?

Well, some of the most beautiful towns in Northern California are in this region.

Yes, there are a lot of cities and towns throughout the six counties.

So, this is a popular area with tourists because it has non-wine activities like national parks, lakes, and rivers.

“We come here to camp,” says Kyle, traveling with his friend Roger in the Armstrong Redwoods State Natural Reserve.

However, to wine connoisseurs, the area is known as North Coast AVA.

It is a designation controlled by the US Department of the Treasury’s Tax and Trade Bureau or TTB.

Meanwhile, all of these counties are located just above San Francisco in a region that is climate diverse.

As a result, their wines are diverse, as well!

Because there are a lot of wineries, as previously noted, we cannot cover them all.

However, there are some you really should check out.

So, let’s dig into this beautiful area.

Because this is home to the premium Californian wines, take advantage of it, and do some wine tasting.

So, where can you do such a thing?

For example, Buena Vista Winery, in Sonoma, which is the oldest winery in California.

It was Hungarian-born Agoston Haraszthy, who founded it in 1857. Likewise, the reconstructed Haraszthy Villa nearby is a Californian historical site.

So, the place is open for wine tasting all year long and has special events.

For instance, you can go on their historic wine museum tour and tasting for $25 person.

“I love their Sherriff wine,” says Rachel, a tourist.

So, the wine is a blend of Cabernet Sauvignon, Grenache, Petite Sirah, Petit Verdot, and Syrah.

It is so named for the fact that the founder of Buena Vista was a real Sherriff.

Meanwhile, other popular spots to stop by include Beringer Vineyards, Charles Krug Winery, and Chateau Montelena.

Because wine tasting can be a trip, you can bike, hike, or even go on a hot balloon.

As a result of the diverse wines available, it can be confusing to a newbie.

So, we recommend trying local stuff and local we mean global!

For example, Christian Moueix is a winemaker from France, but he also decided to make wines in California.

As a result, his Napa Valley-based Dominus label is a top wine for collectors.

Hey, wine, in general, did not originate in California, so.

However, if you want to try “local” stuff, then it also qualifies too.

Because Tod Mostero, a Californian native, is its current winemaker.

Meanwhile, there are a lot of Californian natives who also make wine in this region!

But, the Wine Country is also home to a lot of other things.

For instance, there are Michelin star restaurants, offering some of the best Californian meals you will ever have.

Some of the famous ones include Thomas Keller and his popular The French Laundry restaurant.

Meanwhile, if you’re not familiar with what the cuisine of Wine Country is, we are here to clarify.

So, this cuisine is characterized by the use of seasonal, as well as locally sourced ingredients.

Likewise, it is also highly influenced by its geographical location.

In other words, you’re expecting fresh, wine-friendly dishes that are cooling in the summer or warming in the winter.

However, if you’re not into fancy cuisine, try local stuff elsewhere.

For example, the Oxbow Public Market in Napa has a variety of local dishes that you can enjoy.

Plus, they have a fantastic deck for you to enjoy the views and atmosphere of the Napa River!

Because Wine Country is home to a chic (and trending) lifestyle, there is plenty of shopping to do, too.

As a result, start your shopping at the famous Sonoma Plaza, which is the largest plaza in California.

Popular spots like the Wildflower Boutique will give you a chance to see what we mean by Wine Country lifestyle.

If we had one word to describe it, as we already did previously, it would be “chic.”

That said, it doesn’t mean it means the same to all.

“When thinking about wine country fashion, chic basically comes somewhere in between casual and formal,” says Jennifer Prince. “A not-so-dressy dress that is both breathable and comfy is a good piece to invest in when heading to wine country,” she adds.

Likewise, when it comes to shopping for your home, you want to keep in mind of the culture.

Wine Country is a mixture of Old Europe and the American West.

As a result, you might see Tuscany-inspired stuff or extremely Western obsessions.

So, an excellent place to go crazy for the home is Wine Country Fine Furniture in Petaluma.

Finally, every town has its own many boutiques to offer you a lot of reasons to shop.

This part of California is full of natural hot springs and mineral-rich muds.

As a result, there are tons of spas across Napa Valley and Sonoma County.

Because there are a lot of health benefits associated with this, the region attracts travelers seeking the goods.

So, what are some of the places to visit for your spa needs?

For example, the Indian Springs Resort in Calistoga, which is home to the oldest mineral pool in California.

It has four thermal geysers and a deposit of pure volcanic ash.

Because of the geysers fed to it, its mineral pool stays around 100 degrees Fahrenheit (or 38 Celsius).

“I work a lot,” says Amanda, who lives and works in nearby San Francisco. “So, when the stress gets too much, I escape to this spa and recharge.”

Amanda, who works at a large tech company, says she loves the pool.

“It seems to work out my tension the fastest,” she says.

Meanwhile, there are also the typical spas here.

It was Algerian-born Claude Rouas, and his business partner Bob Harmon, who started this in 1981.

First, it was a restaurant.

However, today it is one of the top resorts in the entire area.

So, expect luxurious facials, massages, and other relaxing treatments—and sometimes paired with wine and delicious fruit.

Meanwhile, keep in mind that the spa services are only for resort guests!

Because of the geographical location, which can see a large amount of rain, the area can be gorgeous and green!

So, start your natural trip at Point Reyes National Seashore, which is a 71,000-acre coastal park located in Marin.

In addition to all the green, you could also go up to its lighthouse and watch gray whales!

Meanwhile, if you’re still looking for green, check out Mendocino National Forest, a vast park that will amaze you.

Because of its million acres of nature, Mendocino is going to leave you feeling like you’re one with nature.

So, both of these parks are great.

For example, did you know that Clear Lake is the largest lake in California that’s all within the state?

That is, the other more massive lake, Lake Tahoe, is partly in Nevada.

So, this is where Lake County gets its name and has a lovely volcano mountain in the middle.

Check out the rivers, as well. For example, the Russian River is a beautiful river that streams through a lot of green.

So, the most beautiful part of California is home to famous wine regions that are collectively known as Wine Country.

Because there are six counties, including Napa and Sonoma, there are about a thousand winemakers in the area.

As a result, it is the most famous wine tourist destination in the United States.

Meanwhile, the region has created its own lifestyle over the years and attracts a large following worldwide.

For example, there is a “chic” fashion and home life that is associated with the Wine Country.

Likewise, its cuisine, which is characterized by freshness and infusion, is famous and highly awarded.

Similarly, there are natural geological wonders, with hot springs and mineral-rich muds, which attract a lot of health tourists.

Finally, the area is home to some famous national parks, as well. The parks, like everywhere else in the country, attract a lot of tourists for hiking, camping, and more.

So, as you can see, Wine Country is a beautiful part of the country that has a lot for diverse travelers!