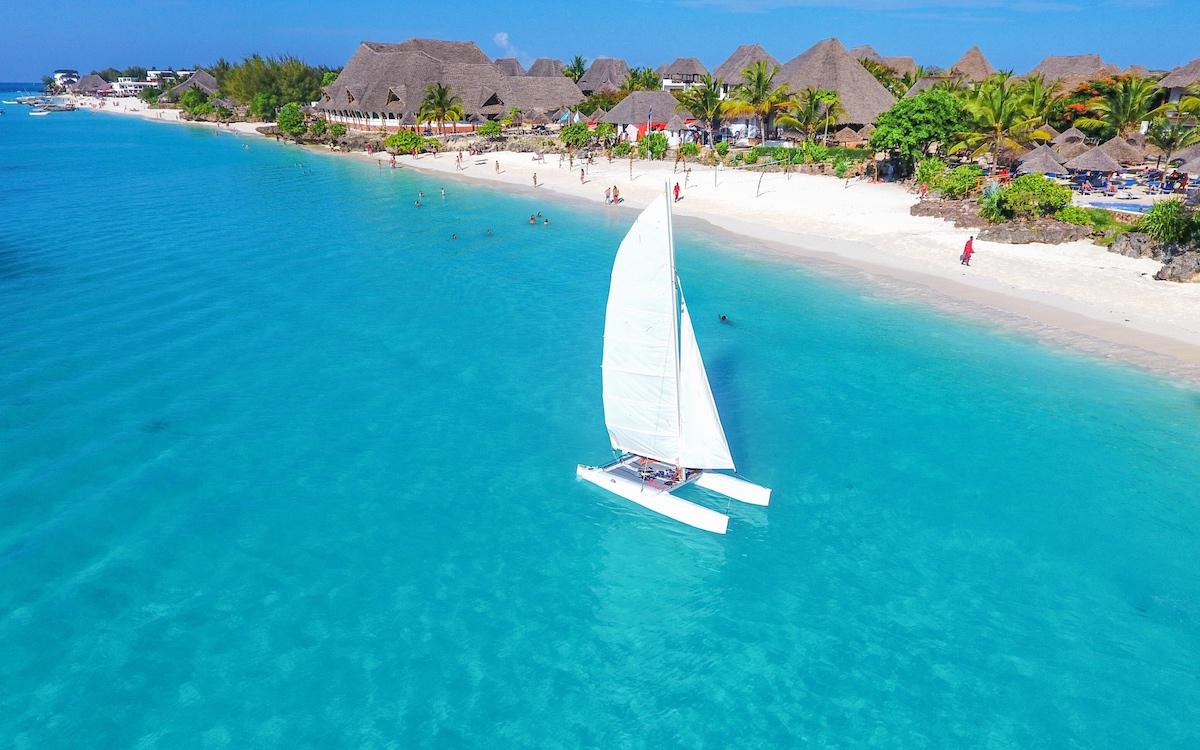 Because the Zanzibar Archipelago is home to many islands, Zanzibar beaches are some of the most beautiful in Africa.

However, to make it simpler, we will focus on the major island of Unguja or Zanzibar Island for this article.

Meanwhile, we will divide the island into west, south, east, and north, focusing on beaches and activities in each section of the island.

Of course, we will also point out some things to do outside of beaching.

When you arrive on the island, you will most likely arrive in Zanzibar City.

Because Zanzibar City is on the western part of the island, it is best we start our beach hunting on this side.

So, my favorite beaches are in Stone Town, in the heart of the historical district of Zanzibar City.

For example, I really like Shangani Beach, which is off of Shangani Gardens.

Likewise, another one I like is Mercury Beach, which is off of Mercury’s Bar and Restaurant.

However, the beaches in this area are really not “beaches” in the traditional sense!

“There are some private beaches I like,” says Sergey, a Russian tourist. “For example, I enjoyed staying at a beach resort in Maruhubi,” adds Sergey, who was traveling with some friends. “We would come out of the villa and there is the beach.”

Meanwhile, you can go a bit more south of Zanzibar City to Fumba Beach, which is about 20 kilometers (or 12 miles) away.

Once you’re done with the beach, you might head to Bweleo, to visit the ladies who are doing oyster farming!

“This is great,” says Anna, a tourist from the Germany. “These women eat the oysters and use the shells to make jewelry to sell to the tourists,” she adds. “They even make pearls!”

The pearl farming project in Bweleo is a USAID-funded project meant to empower women of the region.

Now, that is beaching with a cause!

If you were to head a bit more south to Kizimkazi, you will see more pristine beaches!

Keep in mind, Kizimkazi is about 65 kilometers (or 40 miles) south of Zanzibar City.

So, Kizimkazi allows you to enjoy both beach and culture.

For example, you will be able to see fishing life in the area, as this is a fishing village.

“This is one of the oldest fishing villages in Zanzibar,” says Idris, a tour guide.

Meanwhile, it is very early in the morning and Idris takes a group of tourists with a local fisherman so that they can see how the locals fish here.

“Kizimkazi is where you come to get tuna and other large fishes,” smiles Idris. “It is well known across the whole island.”

However, in Kizimkazi you could also go on a boat tour to visit dolphins!

At the same time, if you happen to be there in the summer, you might decide to visit Makunduchi.

Because Makunduchi is home to the famous mock fights, known locally as “mwaka kogwa” or “show of the year,” it is also popular with Zanzibari tourists.

The eastern part of the island is also home to some beautiful beaches and culture.

For instance, Jambiani is a beautiful village with incredible beach!

“The beach was amazing, but I really liked Kuza Cave,” says Michael, from the United States.

The cave, which is located in Kibigija, is famous for its crystal blue waters, which many tourists report is a bit chilly but perfect on a warm day!

“I loved it,” says Michael.

Meanwhile, you must visit nearby Paje if you’re in the area.

Paje is home to the famous seaweed farms.

“They make cute items from all sorts of things,” says Rachel, Michael’s girlfriend. “I bought soap and lotion.”

The Seaweed Center takes the tourists to the seaweed farming, let the tourists taste the juice, and finally present to them products made by the local women, including soaps.

“It is a lovely thing to see, as women wearing colorful clothes work in the shallow waters of the lagoon,” says Rachel, who was able to join them and work with them for a few minutes.

Meanwhile, Paje is also a place to get your kiteboarding on.

Because Paje has plenty of flat water, it is perfect for kiteboarding and the Kite Centre Zanzibar has programming for all types of people, including beginners.

“I would definitely recommend this,” smiles Michael.

Because you had a chance to see the historical Stone Town, swim with dolphins in Kizimkazi, and kiteboarded in Paje, now you’re ready for some relaxations.

That is exactly what you will find in Nungwi.

Nungwi is the northern tip village home to some amazing beach hostels, hotels, and resorts.

“I was looking forward to it,” admits Jie, a Chinese woman. “I’m so tired and need this,” she adds, as she spreads herself on a hammock.

Her boyfriend Wei says he saw this many times.

Not far from Russian tourists Vladimir and Ksenia sun tan.

“Sure, here you can sun tan and enjoy the breeze of the Indian Ocean,” says Vladimir.

Meanwhile, if you get bored, don’t worry because Nungwi has some cool things like beach bars and night events, too!

Later that evening, Jie drags Wei to a bar and they dance together.

For example, the south central part of the island is where you find the Jozani Chwaka Bay National Park, which is home to the Zanzibar red colobus, the cutest monkeys you will ever see!

Meanwhile, the north central part of the island is where you would find the Kichwele Forest Reserve, which is not as cool as Jozani, but it still offers you a chance to see some animals.

Likewise, there are a lot of Spice Tours in the middle of the island!

Finally, don’t forget there islands off of the main island!

For instance, there is Prison Island, which is home to the giant turtles!

So, you have been to all over the island.

Because this is an island, there are beaches everywhere.

However, beaches are dependent on your interests in general.

That is, what differentiates beaches in Zanzibar is that there other activities associated with certain beaches.

For example, if you want to swim with dolphins you go to south to Kizimkazi.

On the other hand, if you want to see an ecotourism you might decide to go to east to Paje where the local women are farming seaweeds and make cool products.

Of course, if you want to lie under the sun and tan, then Nungwi in the north will be your best choice!

Nevertheless, the island has everything to offer you!