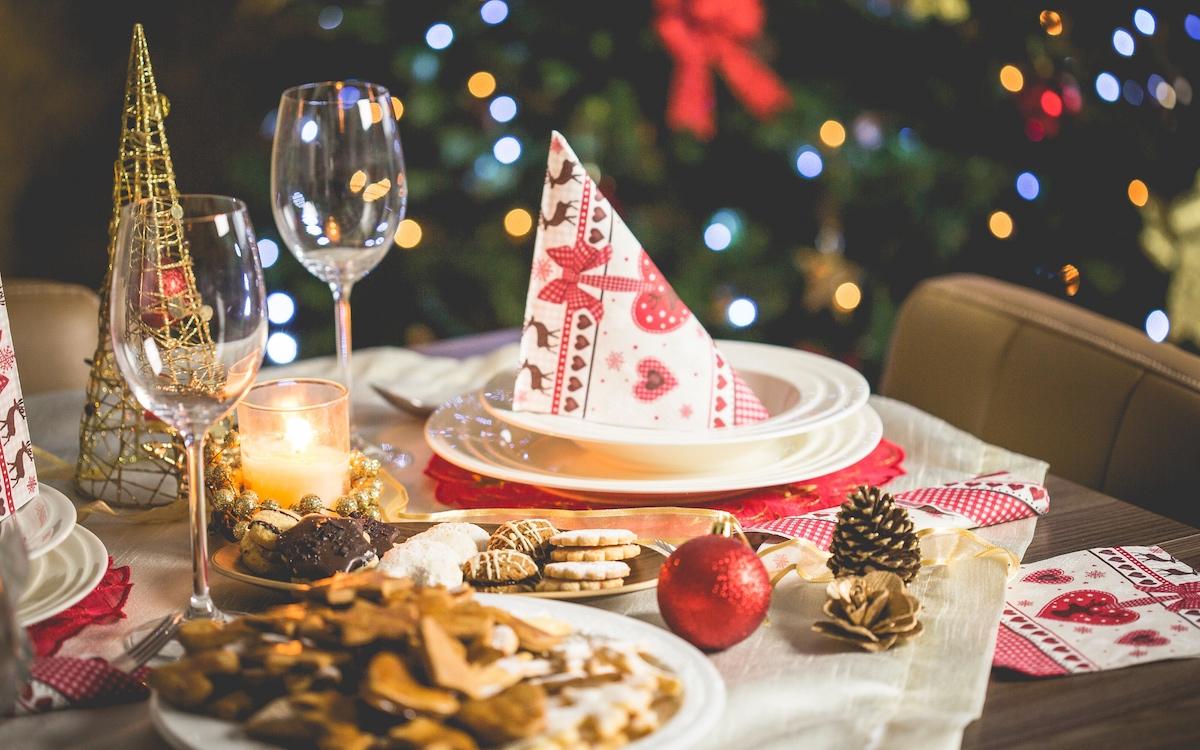 Christmas dinner ideas come from many sources, and we got you covered.

So, in this article, we will discuss decoration ideas for your table, talk about traditions around the world, and share some classic American recipes.

Of course, we will also talk about side dishes, drinks, and even songs to play for your Christmas dinner!

It is the most wonderful time of the year!

One of the most important part of the meal is the Christmas dinner table.

Because the table is where everyone spends most of the time during dinner, your want to decorate it with colors that compliment the dinner.

For example, consider having a centerpiece such as flowers, because centerpieces draw attention.

“A well chosen bouquet can of course add the perfect extra touch to the dinner table,” say the good folks at FloraQueen. “Christmas bouquets are usually resplendent with red and white flowers and seasonal decorations like pine, baubles and seasonal berries.”

Of course, having a white cloth on the table, especially one sprinkled with some stars, automatically makes it festive!

In other words, avoid using Christmas colors like red or green on the table cloth, as some of your guests will be in their Christmas ugly sweaters.

There are so many Christmas dinner traditions around the world.

For example, Europeans such as those in the United Kingdom, France, Spain, Italy, and even Germany have similar traditions to Americans.

However, Europeans like those in Romania, Ukraine, and Poland have different traditions.

For example, in Romania, where Christmas Eve is ajunul crăciunului, boiled plums, a delicious bread called “cozonac,” and corn are part of the tradition.

If you want to try making cozonac bread, you can give Barbara Rolek’s recipe a try.

Likewise, Asian Christians, such as Arabs, Indians, and Chinese, have other traditions.

For instance, in India’s Kerala Christian community, most of whom are Catholic, a popular dish is palappam, which is composed of white pancake-like item called “appam” with a curry sauce that uses coconut.

If you’re feeling adventurous, use this recipe by Maya Akhil.

Similarly, Christians of Africa, such as the Nigerians, Ethiopians, or Egyptians also have completely other traditions.

In Ethiopia, for example, where Christmas is celebrated on January 6th when meat can be enjoyed again, a popular dish is a flat-bread called “injera” with thick stew called “wat” and with meat.

If you want to try it, check out this recipe with chicken by Miriam Garron.

Meanwhile, the next section deals with popular American recipes that you can use, whether you are an American or not.

So, American Christmas dinner recipes are delicious recipes that came to the country through various sources.

For example, roasting beef or pork is such an English thing that came to us through the United Kingdom.

One of our favorite recipes is (beef) standing rib roast. Check out this recipe from Bruce Aidells.

In the meantime, other types of American eat lasagna.

We are absolutely drooling over this three-cheese lasagna recipe from DeLallo.

A growing number of Americans are, of course, opting for modern dishes.

For example, there are many Americans now who are vegetarian or vegan.

So, if that is you, try this delicious grilled tofu recipe from J. Kenji López-Alt.

Can you imagine Christmas dinner without this?

So, cranberry sauce comes to us from the Native Americans, who used it as food as well as a drying agent.

We love this recipe from husband-and-wife team Maria and Josh.

Meanwhile, a popular side dish for Christmas are winter vegetables.

As such, squash is simply an undeniable popular side dish.

So, why not make a roasted squash with cranberries and goat cheese?

Get this recipe by Sunny Jin right now!

In the meantime, if you would like to have salad as a side dish, consider a Christmas salad.

What is a Christmas salad?

Try this delicious salad from Erica, Emily, and Echo.

So, we need to thank the English for another delicious item on Christmas list, as apple pies originate from the United Kingdom!

This classic recipe from Pillsbury is as American as they come, though.

Another popular item, especially in the Midwest, is saffron buns.

Saffron buns come to us from Sweden, where they are known as lussekatter.

Check out this delicious recipe by Sarah Ozimek.

Speaking of delicious things from Europe, have you ever tried a yule log?

Yule logs come to us from France, where they are known as bûche de noël.

Meanwhile, what about a glass of eggnog?

Nothing says Christmas drink like a warm, spiced up cup of eggnog.

Try this recipe from Emma Christensen.

When it comes to alcoholic drinks, there are many.

For example, there mulled wine, which comes to us from Germany, where it is known as glühwein.

If you are unfamiliar, it is basically a spiced and warm wine!

Try this recipe from Ina Garten.

Meanwhile, Hispanic Americans love their sangria, which comes to us from Spain!

So, try this refreshing recipe from Dana Shultz.

Meanwhile, if you’re avoiding alcohol, then perhaps a nice warm cup of pumpkin spiced latte will do.

Otherwise, what about some hot chocolate?

“We wish you a Merry Christmas and a Happy New Year!”

After dinner, you might as well belt out some Christmas tunes!

There are traditional songs like Bing Crosby’s “White Christmas,” which is still the best-selling Christmas song with over 50 million copies sold!

However, we also have modern ones like Mariah Carey’s “All I Want For Christmas Is You,” which is always #1 during the holidays and has led to Carey being dubbed the ‘Queen of Christmas.’

Perhaps you prefer some Buddha Bar chill out stuff for your party?

Christmas is the most wonderful time of the year.

So, Christmas dinner ideas are plentiful!

For example, we talked about how to set up your table, what foods are traditional in some parts of the world, and even shared a few classic recipes!

Meanwhile, for more food articles, Click Here (to go to the food section).