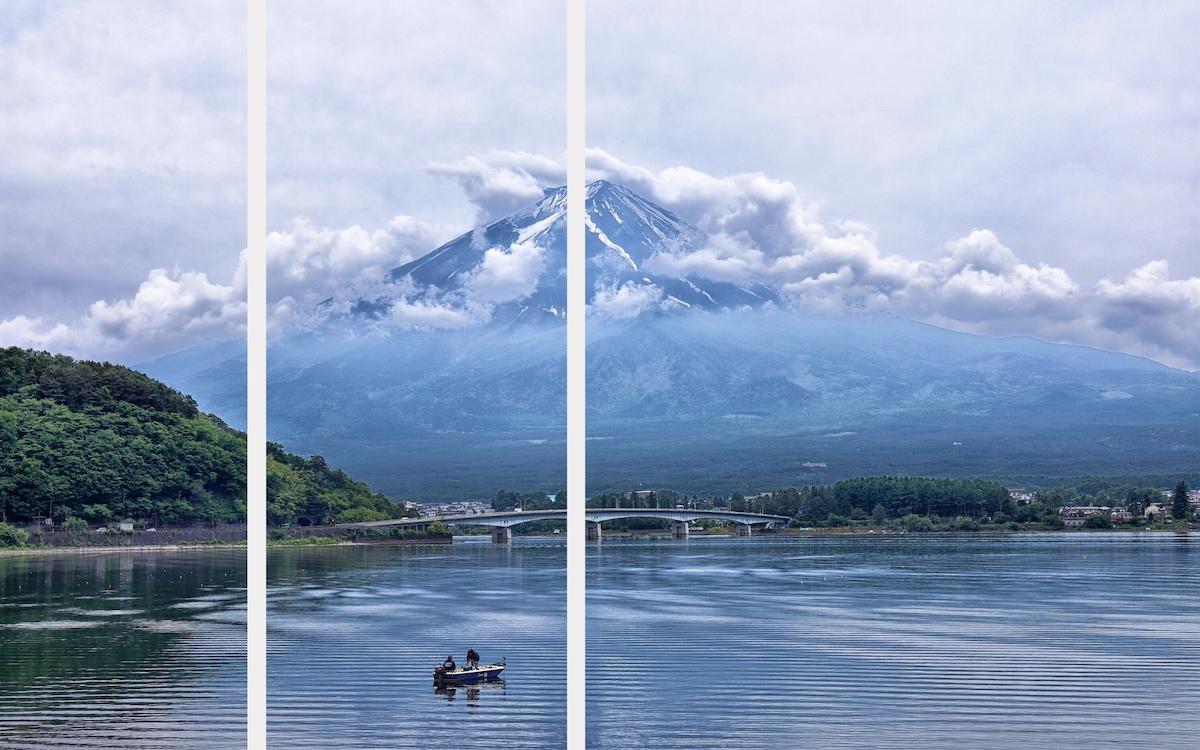 A Japanese woman writes that from climbing to nearby lakes and related flora and fauna, as well as viewing pleasure, Mount Fuji tourism is a must in Japan travel.

Mount Fuji is probably the most recognized site in Japan.

Certainly, it is the most visited place in the country—for both the Japanese and foreigners.

However, as you will see below, this is more than a mountain and certainly far more than a tourist attraction.

For example, did you know there is a holy part to Mount Fuji?

So, let’s explore this famous landmark.

Mount Fuji, called fujisan in the Japanese language, contributes a lot in Japan.

For instance, it has physical, cultural, and spiritual significance.

“Because of its 100,000+ years, it is one of the oldest sites in the country,” explains Haruto Nakamura, a travel expert in Tokyo.

Its age explains why there are so many traditions related to it.

As they can be confusing, let’s break down these into smaller items.

So, because of the long traditions, there are many beliefs about its name, for example.

“It can be confusing even for a Japanese,” says Nakamura.

First of all, the Japanese writing system has several parts.

For example, kanji are Chinese characters that are used since the 1st Century AD to represent Japanese sounds.

So, the word “fujisan” (the Japanese name for the mountain) can have several meanings attached to it.

It can have a meaning relation of “immortal,” for example.

Likewise, the word can be related to “fire.”

Similarly, it can have a connection to “wisteria.”

All of these add to its allure!

So, Mount Fuji is on the island of Honshu.

“Honshu is the same island on which Tokyo calls home,” explains Nakamura.

Inside the island, the mountain borders both Shizuoka and Yamanashi prefectures.

However, its address is in Shizuoka.

“Remember, all of these are newer provinces,” says Nakamura. “Each Japanese province has its uniqueness,” he adds. “As a result, it depends on what attracts you or what speaks to you as a person.”

In other words, don’t discount Yamanashi.

As you will see, Yamanashi has a lot to offer tourists when it comes to this mountain.

Shinto, the indigenous Japanese religion, has a lot of reverence for Mount Fuji.

“There is a long relationship between Shinto and Mount Fuji,” explains Nakamura. “Keep in mind Japan was once a colony of China,” he adds. “But, for some reason, the holiness of this mountain never degenerated.”

For instance, Nakamura says Shinto followers believe that a goddess named Konohanasakuya-hime lives in the mountain.

“Because Konohanasakuya-hime is a goddess that represents Japanese life, the mountain is very popular with Shinto worshippers,” Nakamura explains.

Konohanasakuya-hime is the daughter of Ohoyama-tsumi, a god associated with mountains.

She was also the wife of Ninigi-no-Mikoto, the planter of rice.

A nearby Shinto shrine is dedicated to her and has since become one of Japan’s major tourist attractions.

Meanwhile, there are several Shinto shrines on and around the mountain.

As previously noted, many people believe Mount Fuji is holy.

So, when the mountain had eruptions in the past, they believed it was because the gods were angry.

For instance, there are several lakes around the mountain, and some associate benefits with them.

“Water is the first thing that comes to mind,” says Nakamura. “There are people who sell spring water from the mountain area because they believe it has power.”

Likewise, some people believe sushi (and other seafood) from this area is more delicious due to the water.

Because of its cultural relevance, people also get married on or around the mountain.

For example, since 2016, some shrines offer wedding packages.

Komitake Shrine, for instance, is a Shinto holy place in Fujikawaguchiko, which is a town located in Yamanashi Prefecture.

It is one of the shrines that offer a wedding service.

Meanwhile, there are unique dialects in this area of Japan.

For example, there is koshuben, which is a dialect of Japanese spoken in Yamanashi.

Can you tell the difference between the Tokyo dialect and Mount Fuji dialects?

There is an active volcano in the mountain, which erupted last in 1707.

Due to its association with gods, it was off-limits to many of Japan’s citizens.

“For example, it wasn’t until the 1800s that women were allowed to climb on the mountain,” explains Nakamura.

When the sun rises or sets over the mountain, it has a “diamond” look. As a result, there is such a thing as “Diamond Fuji.”

Meanwhile, when a full moon rises over the mountain, it has a “pearl” look. So, as you can imagine, there is a “Pearl Fuji” phrase for that.

“We Japanese people are very visual,” Nakamura says. “So, many times, we, the Japanese, associate visuals with places,” he adds.

There are several things to see and do in and around Mount Fuji.

In other words, Mount Fuji is not just for climbers!

For example, perhaps you are interested in the views and are looking for the best places to grab a picture.

Likewise, there are villages and festivals around the mountain.

Similarly, you can sample the food, culture, and even purchase souvenirs.

So, let’s explore the attractions.

Because it is such a famous Japanese image, a pictorial view of Mount Fuji is a must.

“Of course, for a mountain this size, there are many places to get that image,” says Nakamura.

However, there is one place you must try to reach.

No, there are five of them!

Any of the shores of the Fuji Five Lakes (Kawaguchiko, Yamanakako, Saiko, Shojiko, and Motosuko) is a perfect view.

“If you can rent a boat on one of the lakes, that is really special,” says Nakamura.

Meanwhile, if you are traveling from Tokyo on the train, try to get a seat on the right side.

Of course, this is assuming you take the Tokaido Shinkansen (high-speed train).

Another view is from Miho no Matsubara, which is a legendary pine grove area.

“By far, this is one of my favorite views of the mountain,” says Nakamura.

The Miho is a 4.5-mile (5 km) famous place that is now a UNESCO World Heritage Site.

From there, you can see the coast, water, and finally, the mountain—all lined up perfectly.

So, there are many ways to enjoy the Mount Fuji view.

Many people – both Japanese and foreigner – come to climb Mount Fuji.

“In fact, over 300,000 people reach the peak every year,” explains Nakamura. “Had the country advertised the mountain more, we would have even more climbers,” he adds.

The climbing season is from early July to mid-September.

First of all, it is not as difficult to climb this mountain, but one must be prepared anyhow.

There is a lot to consider.

“Remember that this is a big mountain,” says Nakamura. “So, you must take some precautions like you would with any other mountain.”

For example, it is a serious elevation gain, and the weather changes rapidly for the extreme.

Likewise, it takes about five to seven hours to reach the summit, and descend takes about half the time.

For someone fit, they can make the trip in one day.

“However, if you’re an average person, consider investing in a hut,” says Nakamura.

Huts are strategically on the way to the summit, and you can spend the night and get meals.

On the other hand, if you can, climb the mountain super early and descend afternoon.

That way, you don’t have to stay in a hut!

There are many places around the mountain to enjoy natural and humanmade flowers.

For example, Grinpa is an amusement park with popular flower festivals like the famous Tulip and Dahlia ones.

It is on the Shizuoka side.

Likewise, another famous spring flower festival is the Fuji Shibazakura, which is a pink moss festival.

“I think this is something exceptional that a traveler should try to coordinate,” says Nakamura.

The pink moss festival is on the Yamanashi side.

Finally, the most popular spring flower festival is the Kawaguchiko Sakura, a cherry blossom festival.

Cherry blossoms are all over the country, and in spring, they are widely in celebration.

“However, in Mount Fuji area, Lake Kawaguchiko has about 300 cherry trees in its northern shore,” explains Nakamura. “It is enough to get your cherry blossom fix and still enjoy the mountain’s spectacular view.”

The trees are in an area that is over half-a-mile (or 1 km).

As a result, a walk among these trees, with the mountain in the distance, is incredible!

Lake Kawaguchiko is in the Yamanashi side.

Mount Fuji area has a lot of special foods.

“It is impossible to list all the foods from this area,” says Nakamura. “However, there are some that deserve special mention.”

For example, on the Yamanashi side, there is hōtō, forever trendy noodle soup from the region.

“Originally, this was a Chinese soup, but perfected in this region over time,” explains Nakamura.

Likewise, try the kōshū wine, made from the European-Asian hybrid grape of the same name that grows only in Yamanashi.

“For a long time, people thought it was a European variety,” explains Nakamura. “However, at some point, it came out that it was, in fact, a hybrid.”

On the Shizouka side, try the shizuoka-cha, a popular green tea that you steam for a long time.

“A beloved taste of this rich soil, this tea is delicious,” says Nakamura.

“Yumi is well-known across Japan and the world,” says Nakamura. “If you love sushi, you probably have heard of her.”

And she makes lovely pieces!

So, this area has many types of resorts, says Nakamura.

For example, Fujiten Snow Resort is a ski resort that is family-friendly and has incredible views of the mountain.

There are also spa resorts!

“Because of the rich soil, there are many types of body spas all around the mountain,” explains Nakamura.

For example, Iyashinosato is a reconstructed ancient Japanese in the Yamanashi side of the mountain.

It offers several things to tourists.

“For instance, you could explore the old homes,” says Nakamura. “Or you could rent ancient clothing.”

Imagine, a picture of you in which you like an ancient Japanese person with Mount Fuji in the background!

Meanwhile, Oshino Hakkai is a traditional village located in a scenic setting and has a lot to offer to tourists.

For example, this village has eight ponds, which are very popular with Japanese tourists.

Likewise, you can purchase souvenirs from many of the vendors from the village and nearby areas.

Similarly, you can sample area foods, too!

How to Get There

There are many ways to get there.

So, the fastest way is with a high-speed train.

If you take the Fuji Excursion Limited Express train from Tokyo’s Shinjuku Station, you go direct.

The train arrives at Kawaguchiko Station.

However, if you already purchased the Japan Rail Pass, then you take another train.

But, you would have to transfer to the Fujikyu Railway line for Kawaguchiko Station.

Meanwhile, many buses go there, too.

Likewise, you can hire a car.

In this article, we covered the name, map, and location of the mountain.

Likewise, we talked about some unique facts, where to find the best views, and how to prepare a climb.

Similarly, we talked about the cultural elements around the mountain, including villages, dialects, and food.

Mount Fuji is probably the most famous tourist site in Japan.

As a result, Mount Fuji tourism can offer a chance to really experience Japanese culture uniquely.