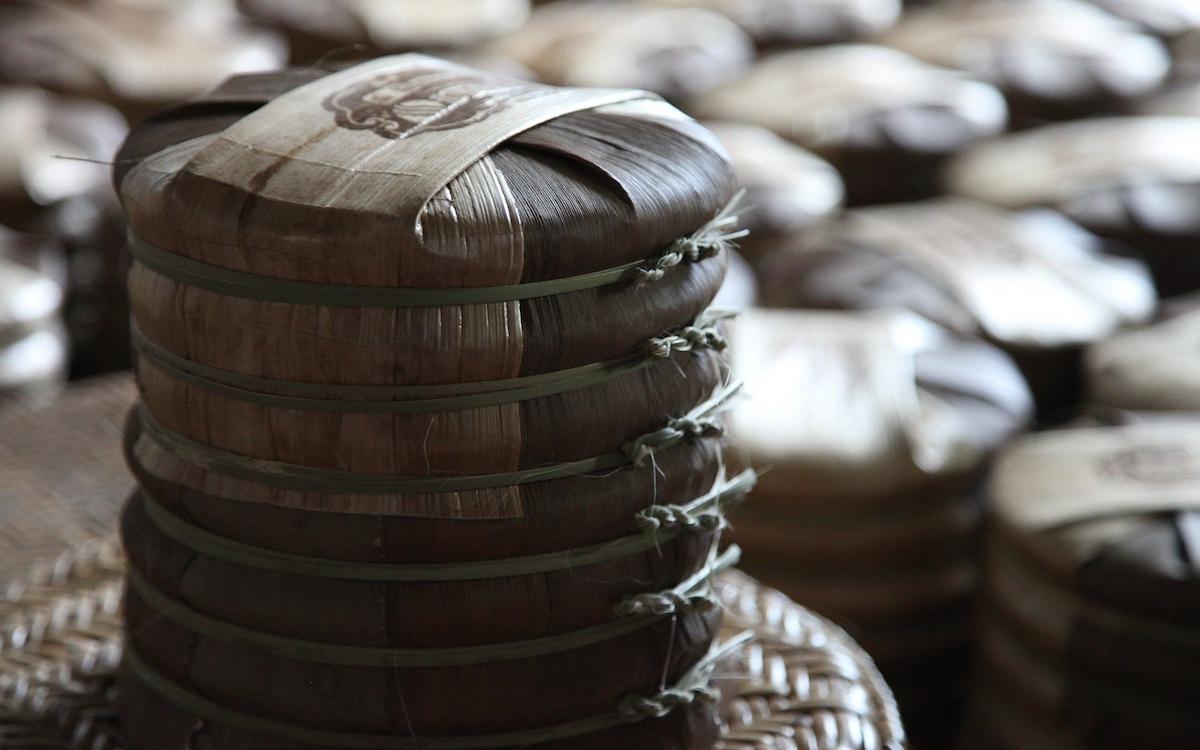 Pu’er tea (普洱茶), sometimes stylized as “pu erh” or “pu-erh,” is a tea that grows in the Yunnan province of China and, after which the city of Pu’er is named.

So, the tea is picked, rolled, and dried to make it the unique tea that it is.

This article will describe its history, place today in society, as well as how to drink it and its benefits.

Meanwhile, the article will also use Zhang Yuanyuan, a personal contact, as she is a lady from my neighborhood.

Zhang Yuanyuan is a lover of pu’er tea and will give you an insight into the world of this tea!

Pu’er is picked in the Yunnan province, and some of the trees from which it is picked can be thousands of years old!

So, two types of this tea are hardened into cakes and officially stamped (like the picture in this section).

Meanwhile, there are two types of processing.

Since ancient times, one process has been to age the tea for up to 15 years before it is sold to consumers.

“This is my favorite kind of pu’er,” says Zhang Yuanyuan, who has been drinking this tea for decades. “It can be very expensive, as some have been sold for a lot.”

Zhang Yuanyuan is right. In China, some people love old pu’er they are willing to pay a huge sum.

Of course, the aged pu’er is the most desired and ancient. However, after World War II, mainland refugees on the islands, especially in Hong Kong, created a massive demand for the tea.

As a result, a faster method was created where the tea is no longer aged years but mere months!

“If you’re not a pu’er lover you may not even notice the difference,” says Zhang Yuanyuan.

Because it can be expensive, the tea is very clear commercially, as the stamp will tell you its producer, age, and other basic information.

There is a “hairy” stage.

After that, there is a “unripe” stage.

Finally, there is a “ripe” stage.

Each stage has its fans, because ultimately it is the drinker and not the drink itself, right?

The first stage of pu’er tea is “hairy” (毛). For that, see the pic in this section, doesn’t it look like hair?

So, the word mao (毛) is a word that can be used for hair, wool, and feather.

But, it is also a word that can be used for rash or careless.

In that case, this stage is slightly “hairy” or “fuzzy.”

During this stage, the tea is not fermented. Instead, it is in dried leaves that are ready to be used for tea.

“I don’t really like it like that,” Zhang Yuanyuan says, shaking her head. “Pu’er is best when it is fermented. Otherwise, it can be any tea.”

Of course, health conscious new age people will disagree with her.

Then, of course, there is a stage of “unripe” (生), which takes place after the hairy or fuzzy stage.

In other words, sheng is a stage in which the previous stage of the tea can see a chance to be processed and aged.

This is the stage most people are familiar with when they hear “pu’er,” as it is the traditional way to do it.

“This is my favorite stage,” smiles Zhang Yuanyuan. “It is how my mother liked it, also. If you’re a true pu’er lover, it is hard to disagree that this is the best of the tea.”

Zhang Yuanyuan says pu’er has many benefits and this is the stage that has most of it.

“It is with the sheng stage you really notice a difference,” says Zhang Yuanyuan.

Because shou stage is evenly fermented through wetting, piling, and turnings, it is popular!

The shou stage is also darkened and is called “black tea” in China, rather than the “red tea” that English speakers call “black tea.”

However, it is the sheng stage that has the most antioxidants.

How to Drink Pu’er Tea

Because Chinese culture values tea so much, there are many ways to drink some of the different teas available.

So, when it comes to pu’er tea, like many teas, it is drunk after it has been in hot water for some time.

For example, some pu’er lovers will let their teas stay in the leaves for as long as 20 minutes!

“I think it is good after 10 minutes,” says Zhang Yuanyuan. “You will get most of the benefits after 7 minutes or so.”

Of course, the tea is ready for drinking after just several minutes.

Pu’er doesn’t have a “specific” taste, but it gets darker and stronger as more minutes pass.

Meanwhile, pu’er, like most teas, is enjoyed in a gaiwan (盖碗), which is a tea ware set composed of a saucer, cup, and lid.

“So, a gaiwan is used when the tea is loose, because it is helpful,” says Zhang Yuanyuan.

In other words, you would not use one when using a teabag. This is because the lid is used to keep the leaves out of going into your mouth.

In the meantime, the saucer keeps your hands from burning, because the cup will be hot.

Although Chinese people have been using teas for thousands of years, gaiwans have been used only since the Ming Dynasty, whose 300-year reign ended in the 1600s.

So, one of the reasons people drink pu’er tea is that it has health benefits!

In many Chinese households, pu’er tea is consumed after meals.

“For me, it is a must after a greasy or fatty meal,” says Zhang Yuanyuan.

There are two reasons for that.

First of all, people believe that pu’er tea cleans out heavy stuff out of the stomach.

Second, it is a widespread belief that the fermentation of the tea leads to fat loss!

“I had a friend who had to move to Guizhou for work for some years,” Zhang Yuanyuan says. “When she came back I noticed she gained weight,” she adds. “On her birthday I gave her some pu’er and by the end of the year she was slim again.”

As a result of the belief that it helps with weight loss, it is a popular tea with women. Although there is no science to back it up, many women swear by it.

However, another popular belief is that pu’er tea makes you happy.

“I feel very happy after a cup of the tea,” says Zhang Yuanyuan. “You don’t feel it immediately, but you eventually start to feel very happy. So, when I feel sad I start to brew some.”

It could also be because Zhang Yuanyuan loves an old pu’er and the experience makes her happy.

So, pu’er tea is a very old tea and people in the south have been drinking it for thousands of years.

It is divided into three stages, ranging from health to ancient to modern.

Because it is a product that highly depends on individual taste, there are fans for each stage.

Zhang Yuanyuan, the lady from my neighborhood, says the first stage is boring.

“It is for tourists, maybe,” she says.

But she swears by the second stage, the ancient stage.

However, she doesn’t mind the modern one.

“Perhaps it is similar to the ancient way, I don’t know,” she says. “But it does not upset me like the first stage.”

Yes, the lovers of this tea can be very passionate!

Will you try it?