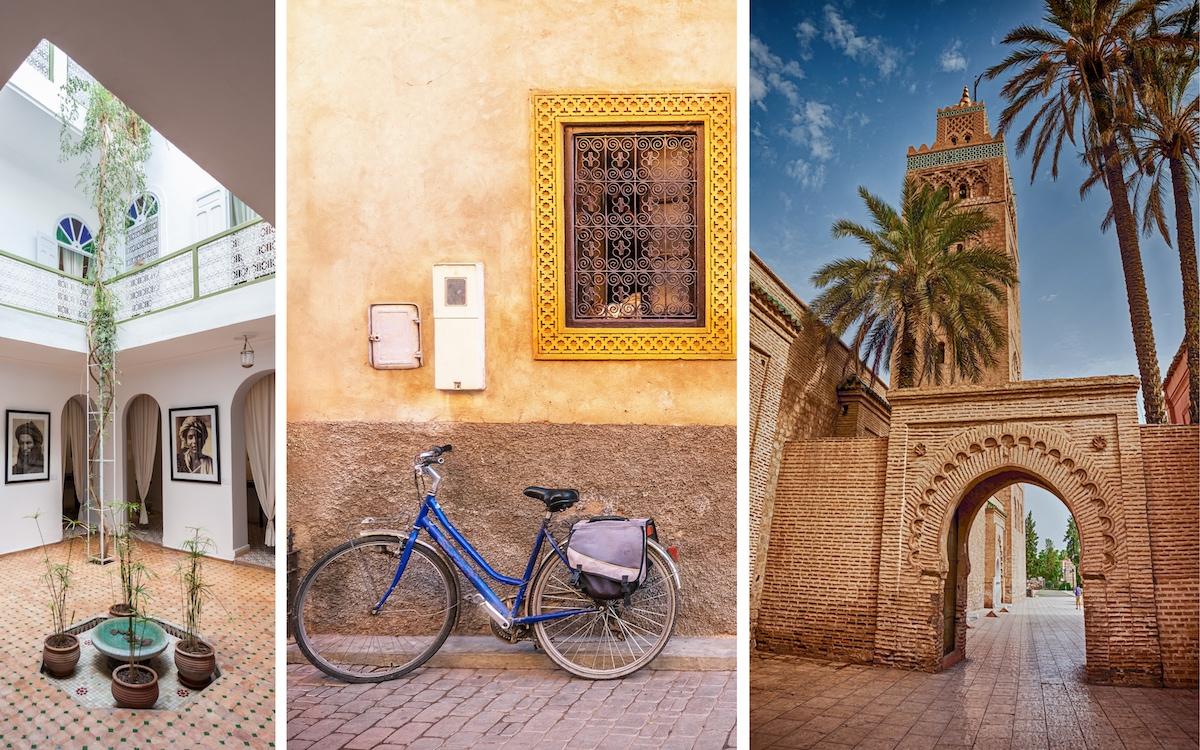 Because this is the top tourist destination in Africa, Marrakesh travel has a lot of things to do and see. A guide for travelers by a traveler.

Morocco is the top tourist destination in Africa.

Why shouldn’t it be?

This is a country that has it all—the Sahara Desert, the Atlas Mountains, the diverse people, the melting pot of cultures, and more!

So, it should come no surprise that its top tourist city is also a marvelous place to visit.

So, let’s explore this destination.

Marrakesh Things to Do and See

Marrakesh, unlike many other top destinations in Morocco, is not on the coast.

So, it is definitely not a beach town.

Instead, it offers incredible history, art, and culture.

For example, the old city’s walls date back to the 1100s.

The old city, or the Medina, is therefore inside those walls.

Meanwhile, the center of that old city is Jama El F’na, a very cool square.

So, we will explore all of that and more!

So, one thing that the traveler immediately finds out is that in English the name of this city has two spellings.

There is marrakech, which is a French-influenced spelling, as the name of the city is spelled as such in French.

“From 1907 to 1956, the French occupied parts or all of Morocco,” explains Hamza, a tour guide in Marrakesh. “Because of this association, the French had a lot of interest in Morocco and wrote about us,” he adds.

As a result, the Western societies knew much of Morocco through France.

“There was a time when you could find most interesting travel expeditions in French or Arabic only,” says Hamza.

For instance, Ibn Battuta, a famous travel writer from historical Morocco, wrote only in Arabic.

“And, of course, his books were translated in French,” explains Hamza.

On the other hand, the English spelling of marrakesh came out of the relationship between Britain and Arabia.

The Arabs of Arabia did not have much relationship with France, explains Hamza.

So, their spelling of Arabic words in English is different.

Meanwhile, the word is spelled one way in Arabic and another in Berber languages.

Arabic and Berber are the languages most locals speak natively.

So, as you can see, this is a city with diverse spellings.

Because of its place in history, Marrakesh is full of things that you must see.

For instance, there are walls around the city that date back to the 12th century.

“It was the Almoravids who built them,” explains Hamza. “They protected the city from invaders,” he adds.

So, they used orange-red clay and chalk to make them, which made the use of these material popular overtime.

“And that is why the city is called the Red City,” explains Hamza.

Meanwhile, there are gates and towers along the walls.

“For example, there are 19 historical gates,” says Hamza. “The most famous and most beautiful is, of course, Bab Agnaou. The royals used it to enter the medina (old city). So, it is decorated nicely!”

However, explains Hamza, the main gate is the less attractive Bab Er-Robb.

There are also 200 towers along the wall.

So, this is the old city of Marrakesh, and today it is a UNESCO World Heritage Site.

“It is the most important part of Marrakesh,” explains Hamza.

The medina occupies the original fortified quarter from which everything else grew.

And, there is a lot to do and see here.

For instance, its cobblestoned alleys will get you wandering through a maze of unique lanes.

There are many riad or residences with ornate courtyards.

“Of course, there are also a lot of masjid (mosques or places of Muslim worship), too,” says Hamza.

Likewise, there are hammam or bathhouses, and some of which are very historical.

Similarly, there are souk or markets, which bring everyone together.

However, these alleyways always bring you back to the center.

“Of course, the Jama El F’na is the center of it all,” says Hamza.

So, let’s explore this center a little more.

Because it acts as the center of everything, the square is open all the time.

“So, there is morning, afternoon, and evening crowds,” explains Hamza.

The morning is when the locals go to the market, to buy their daily things or to shop in general.

For instance, the locals won’t go out in the middle of the day when it is hot.

“However, a lot of travelers spend the morning at their riad or hotel,” says Hamza. “A lot of the hotels offer breakfast included with the price, for instance,” he adds. “So, the travelers may not get to the square until mid morning or even lunchtime.”

Meanwhile, there are many tourist friendly eateries in and around the square that serve all day.

For example, Argana café, a popular spot here, is open from 8am to midnight.

Then, the market is also very active in the late afternoon and evening with both locals and tourists.

“We Moroccans like to go out, especially the men,” says Hamza. “The center has many local places to hang out with friends and family,” he adds.

Likewise, there are entertainment in and around the square, which are tailored to both locals and tourists.

For example, there are snake charmers, belly dancers, and even b-boys breakdancing away!

The square is also a great place to eat dinner, for both locals and tourists.

“You can find locally made food,” says Hamza.

So, what type of food is there?

Marrakesh, as previously noted, is a place where diverse cultures meet.

As a result, there Arab, Berber, and French foods.

In other words, the foods are diverse, as well.

“You can find this type of bread all over Arab countries,” she says.

So, a khobz is enjoyed in diverse ways, including eating it with condiments or dairy items.

“Of course, with mint tea, which is stable here in North Africa,” says Walker.

Meanwhile, Walker says a popular way of cooking for Berbers is to use a tagine, which is a clay pot.

“Without hesitation my favorite Moroccan lunch is a marrakshi tangia,” says Hamza.

Marrakshi tangia is a lamb dish made in the clay pot that originated in Marrakesh.

“So, anything made in the tagine will have ‘tangia’ at the end,” explains Walker.

A popular grain is the couscous, which is made from semolina.

Walker says couscous has very little fat and is a good source of carbohydrates.

Moroccans can enjoy couscous in variety of ways, such as in place of rice, quinoa, or oatmeal.

So, Hamza says the most recognized site in Marrakesh is the Koutoubia,sometimes styled as kutubiyya, a 12th-century mosque.

“It is historic and has beautiful garden,” says Hamza. “As a result, many tourists want to see it,” he adds.

Meanwhile, its minaret tower (pictured), which is 253 feet (or 77 meters) in height, is the tallest structure here.

Another popular tourist spot is the Jardin Majorelle, which is a beautiful place that has a garden.

“French-born Jacques Majorelle created it, and it has exotic plants, gorgeous fountains, and a gorgeous blue-colored walls,” says Hamza.

There is also a Cubist villa at the gardens, which Paul Sinoir designed in the 1930s.

Likewise, another amazing location is Bahia Palace, which is from the 19th century and has Islamic-Moroccan vibe to it.

Similarly, the Saadien’s Tombs is a very popular site.

“This where the Saadian dynasty rulers were buried,” explains Hamza. “They have been open since early 1900s, but the tombs date back to the 1500s.”

So, these tombs are really beautiful, as they have Islamic designs on the tiled walls.

Because it is the most popular destination in Morocco, the top tourist country in Africa, Marrakesh is a must see!

As a result, we covered several things in this article.

For example, we explored the old city, its famous square, and interesting walls.

Likewise, we looked at top tourist attractions like the famous mosque, palace, and garden.

In other words, you got a taste of the Jewel of the Sahara Desert!

Therefore, to get the real taste, you will have to plan a visit.