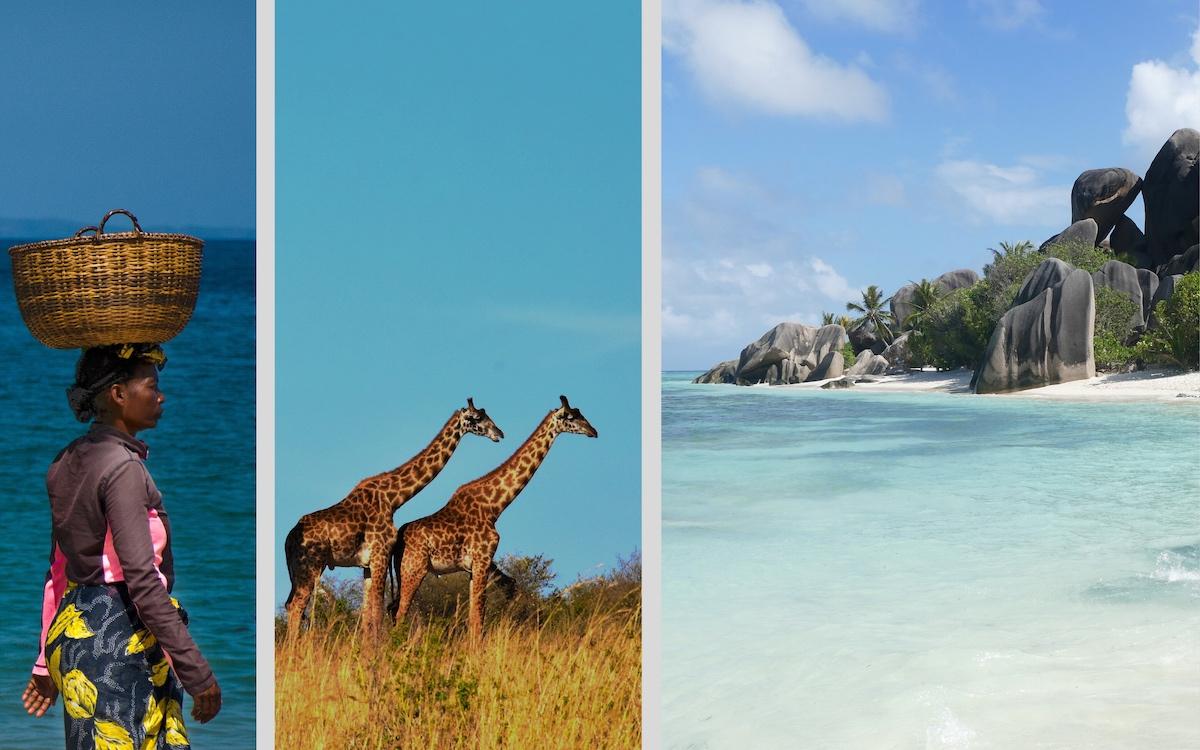 So, you want to go visit some African countries.

Guess what, you came to the right place!

Because Africa is the motherland of all humanity, it isn’t surprising that it’s full of jaw-dropping places, peoples, and cultures!

Meanwhile, because Africa is not one country, the essential people, places, and things are scattered throughout!

As a result, the focus here is on the “big” stuff, reducing your African trip to just 7 countries.

So, come along with us and see the best of Africa!

So, Tanzania, a country on the eastern part of the continent, is home to probably the most essential thing in Africa: the Serengeti.

“The Seregenti is a national park that is located on the border with Kenya,” explains Brandon Williams, a travel expert. “Because of its status and location, it gives tourists a chance to see the most famous African wild animals.”

In other words, this is the place to be to see the elephants, the crocodiles, the lions, and more!

As a result, it is our number one spot in Africa—as the African wild is unmatched by any other continent.

Meanwhile, Williams says there are 70 types of large mammals, including the famous buffalo.

“Because of this, the park is one of the Seven Natural Wonders of Africa,” explains Williams.

So, what are some of the things to see in this park?

For example, Williams says the migrating wildebeest is a must-see.

“Nearly two million of these animals make their way across the park from January to March,” explains Williams. “So, that is probably the best time to be there.”

However, if you can’t make it during the time of the migration, you can still see them later.

For instance, because this is the season to raise the young, the wildebeest stay around the Grumeti River until June.

So, how do you get to this park?

Because you will probably fly into the capital, Dar Es Salaam, you can hire a Safari tourism company.

Then, they will take you to the park.

So, if you have more time in Tanzania, check out these other must-see attractions.

Mount Kilimanjaro is the tallest mountain in Africa.

Zanzibar is an autonomous island region off the coast.

Lake Victoria is the largest lake in Africa!

For more destinations, check with your local travel guides.

So, you have had the chance to see the wild part of Africa, what about some fascinating human history?

That is where Egypt comes in.

“Ancient Egypt was probably the most incredible of the ancient cultures,” explains Williams. “Science is still working hard to figure out how they knew so much in their time,” he adds.

So, Ancient Egypt may no longer be here, but modern Egypt has everything for you to gush over.

For instance, Giza, which is just outside of Cairo, is home to the magnificent Great Pyramids of Egypt!

As they’re the only survivors of the Seven Wonders of the Ancient World, you will definitely want to see these!

“Because there’s still disagreements over how they came about, they’re still controversial thousands of years later,” says Williams. “For example, there are so many theories about them,” he adds. “However, what all researchers agree on is that there is definitely a lot of intelligence behind them.”

For instance, Williams points out there are astronomical precisions associated with them—far beyond their time.

So, how do you get to the place?

Because you will probably fly into Cairo or other tourist destinations, you can just jump in a taxi.

“You can also take the metro from central Cairo,” says Williams.

In other words, lots of options!

So, talk to your hotel, and they will help you plan your visit.

So, if you have more time in Egypt, don’t forget these other attractions.

Rasheed is where the Nile River meets the Mediterranean Sea.

Khan el-Khalili is an ancient market in Cairo.

Hurghada is a great place to go and dive into the Red Sea.

Valley of the Kings is home to a large number of pharaoh tombs.

Aswan is home to the Nubian people, an ancient ethnic group.

For more information, check with your local travel partners.

So, Morocco has been the number one tourist destination in Africa for years!

“Because it has a lot of diverse things to see,” explains Williams.

For example, there are several historical settlements like Marrakesh, as well as beautiful landscapes and exciting culture.

However, the real reason I’m asking you to go there is that there is another African phenomenon: the Sahara.

“It is the largest hot desert in the world,” says Williams. “Because of its location, Morocco is the best place to experience it,” he adds.

For example, there are towns like Ouarzazate, which have incredible desert cultures, including something called kasbah.

“So, kasbahs are like desert fortresses, as they are generally made of earthy materials,” Williams explains. “Therefore, these are fixtures throughout the desert in Morocco.”

Meanwhile, the dessert is home to diverse groups such as Arabs, Berbers, and others—all with their unique cultures.

As a result, a trip to the desert in Morocco is like stepping into another world!

So, how do you get there?

Williams suggests starting your trip in one of the larger cities in the north.

Then, you will hire a desert safari company, and they will take you there.

Meanwhile, make sure to be careful, as some tourist companies are shady.

For example, Williams suggests asking to verify that they are legitimate, because, in Morocco, tourist companies are licensed.

Likewise, he says to look for reviews online and go with one that has a good reputation.

Finally, make sure they speak your language!

Atlas Mountains is where you can experience Berber villages.

For more Morocco travel, check with your local travel tribe.

Zimbabwe is a rather quiet country in southern Africa, except that it is home to a loud bang: Victoria Falls.

So, Victoria Falls, with which Zimbabwe shares Zambia, is the largest in the world!

“Think of it this way: it’s about twice the size of Niagara Falls,” says Williams.

In other words, this is an incredible sight!

Meanwhile, if you’re risky, you can swim in the Devil’s Pool, which is literally on the edge of a cliff.

“People do it all the time,” says Williams. “However, there is a risk that you could indeed go over the edge,” he adds.

So, you do have to brave for that one.

In the meantime, to get to Victoria Falls, you have a couple of options.

For example, you can fly into Victoria Falls airport.

However, you could also fly into Livingston, which is nearby.

“They’re both good options,” explains Williams. “Of course, it depends on where you’re coming from,” he adds.

So, there are flights from the Zimbabwean capital of Harare.

So, if you got more time on your hands, here are more things to do.

For more information, check with the local travel industry.

So, time and again, Anse Source d’Argent Beach has been voted the top beach in the world.

Hey, you’re in Africa, you might as well go check it out!

Because the Seychelles is an island nation, you will probably find tons of beaches to soothe your mind.

However, Anse Source d’Argent is probably the most photographed beach on the planet.

“It’s stunning, and there is a lot to get you excited,” says Williams.

For example, the dramatic rocks rising out of the white sands near the water.

Meanwhile, this beach is located on the island of La Digue.

So, to get there, fly into Isle de Palme airport in Praslin and take a taxi to the jetty.

After that, jump into one of the official boats to La Digue.

More in the Seychelles

So, if you have more time, go visit more islands!

Mahé is the largest island.

Amirante Islands are outer lying islands that are really cool.

For more of the Seychelles, check with your local travel guides.

So, Ethiopia is one of the oldest countries in the world.

For instance, the oldest human bones are found in Ethiopia, says Adam Jackson, the author of The Ancestral Trip.

“However, Ethiopia is a country worthy of your visit for so much more,” Jackson says. “For example, Ethiopia is home to some of the oldest churches in the world,” he adds.

Likewise, the country is very diverse, having over 80 ethnic groups, says Jackson.

As a result, the food is incredible, says Nina Walker, who recently wrote for us about Ethiopian food.

“Because the country is influenced by so many, the flavors are incredible,” says Walker.

Meanwhile, Jackson says the country is home to mountains, deserts, and diverse animals.

In other words, there are so many reasons to visit!

But, actually, we want you to visit Lalibela.

It is an ancient church in the Amhara region.

“Because some of its churches are completely cut out of rocks, Lalibela is an incredible place for tourism,” says Jackson. “Meanwhile, some of these churches date back to the 12th Century!”

So, Jackson recommends checking out a be called Beta Giyorgis, which is cross-shaped.

“Of course, many of them also all connected by an underground tunnel,” noted Jackson. “And, inside, they have colorful things like frescoes that are colored!”

Meanwhile, these rock-hewn churches are part of a UNESCO World Heritage Site.

So, if you have more time, check out the following cities, too!

Addis Ababa is the bustling capital of the country.

Gondar is home to a walled fortress and was once the seat of Ethiopian emperors.

Aksum is home to the historic Aksumite Kingdom.

Dire Dawa has ancient markets like the famous Kafira Market.

For more of Ethiopia, check with your local travel partners.

Senegal is one of the most interesting Francophone countries you will ever visit.

So, one of its famous spots is Gorée, an island off of the capital.

However, as a result of being a port for the Atlantic Slave Trade, Gorée is not a typical tourist spot.

Instead, it’s definitely a place to visit with a serious focus.

For instance, there is the House of Slaves, a colonial building that is now a museum.

“It was a horrific place for our people,” says Adama, a woman who visits the island from Dakar, the capital.

Meanwhile, the museum, known in French as maison des esclaves, has Door of No Return, a symbol of horror.

“So, once you crossed this door, your fate was to be taken far away as a slave,” says Adama.

Likewise, for more general history of Senegal, check out the IFAN Historical Museum.

Similarly, the Henriette Bathily Women’s Museum focuses on the contribution of women in society.

So, if you have more time, check out the following cities, too!

Dakar is the capital of the country and is the Paris of West Africa.

Touba is a great place to experience Sufism and has a beautiful mosque.

Niaga is home to Lake Retba or the Pink Lake.

For more information, check with your local travel partner.

What a beautiful continent.

So, you had a chance to learn more about seven African countries to put on your list!

For instance, you explored East Africa’s Tanzania, Ethiopia, and Seychelles.

Likewise, you had a chance to learn more about North Africa’s Egypt and Morocco.

More importantly, you learned that these are not just some random countries.

Because they are home to some of the most essential things on our planet, you realize we were actually doing something else.

We were sharing the beauty of the planet with you!