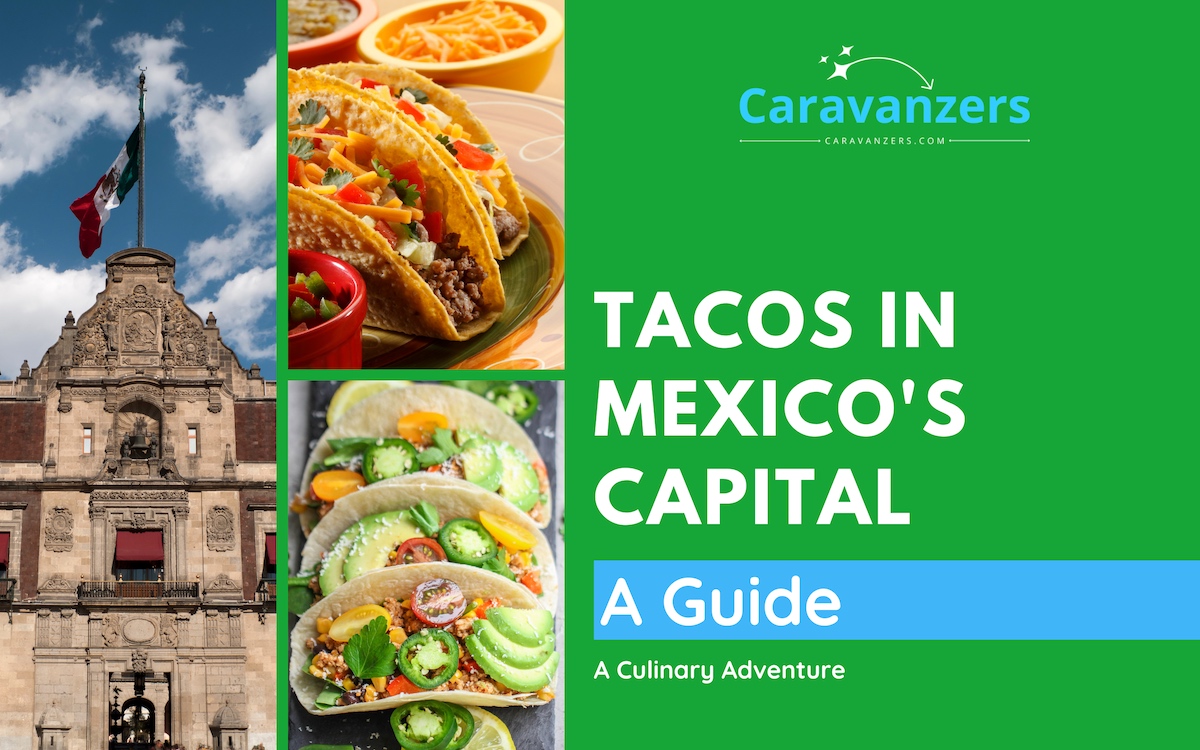 Tacos in Mexico City are some of the best meals you can have in this global metropolis. From street vendors to high-end restaurants, let’s dig in.

Mexicans love their tacos, and they have a whole day dedicated to eating them! On March 31st, people all over Mexico City make a conscious effort to eat more tacos than normal.

The day is known as the “day of the taco” (día del taco), and it’s a time for people to come together and enjoy their favorite food.

Tacos are very popular in Mexico City, and you can find them just about anywhere you go. From street vendors to high-end restaurants, tacos are plentiful.

If you’re ever in the city, be sure to try one (or two or three) of the delicious tacos!

There are tons of taco types in Mexico City, but here are some of the ones you must try.

Tacos are a Mexican dish. These delicious items consist of a corn or wheat tortilla filled with meat and toppings.

The most common type of taco is the ground beef taco. Still, there are many other variations, such as chicken, fish, shrimp, and vegetarian.

Tacos are typically served with salsa, sour cream, and cheese. People enjoy tacos because they are delicious and customizable.

For example, you can make them as straightforward or as complex as you want. Some tacos come with unique or even exotic ingredients. However, some are made from everyday items, too.

The best way to enjoy tacos is to make your own at home. This way, you can control the quality of the ingredients and add whatever toppings you like.

However, there are famous taquerias or places to eat tacos. Some of the taquerias specialize in a specific type of tacos, as you will see in this article.

There may be many types of tacos in Mexico City, but this is the city’s most unique. As the name says, tacos de canastas are basket tacos, meaning served from a basket.

The woven baskets are usually in beige colors but will have blue plastic bags lining up the top.

Generally speaking, there are many layers of covering before the vendor gets to the tacos. Because the tacos are steamed, they need to be covered.

The vendors are biking around the city, making them stand out!

Tacos de canastas are usually filled with meat, potatoes, and even beans!

Although these are very popular in Mexico City, tacos de canasta originated in Tlaxcala. This tiny Mexican state has contributed a truly delicious type of tacos.

The most common fillings are stewed beef or chicken, but you can also find many kinds, including chorizo or sausages.

You can eat them as is or add some salsa or guacamole for extra flavor.

Tacos de canastas are usually very cheap. You can often find them costing 20 pesos for three of them.

In other words, a nice lunch for 1 USD.

If you wander around Mexico City, the chances are you will see these. It’s made from spit-grilled pork and is extremely popular.

The meat hangs on a slowly turning pit that continuously roasts it. Pieces of the meat are then cut and served on a corn-based tortilla.

Somehow, the mixture of corn and grilled meat creates a unique taste that people really love.

The common belief is that this taco originated in Puebla. This is a state where many Lebanese immigrants settled. As a result, this is a clear influence from the Lebanese shawarma, which is usually lamb.

Meanwhile, in Mexico City, there was a woman named Concepción Cervantes in the 1960s. After becoming a young widow, Cervantes teamed up with an Arab man named Josué. According to her, together, they came up with the idea.

In the end, it doesn’t matter “who” invented it; this is a delicious taco you must try!

So, where is a good place to try it? El Tizoncito, a chain of taquerias that Cervantes started.

They’re all over the city!

Longaniza tacos are a delicious and popular dish in Mexico. They are made with longaniza sausage, which is pork and spicy.

Although it originated in Spain, this sausage is now very popular in Mexico. It’s typically a breakfast dish, where it has eggs and is eaten with tortillas.

However, longaniza is also delicious as a taco!

The sausage is cooked with onions and peppers and then served on a soft tortilla with salsa and sour cream.

These tacos are sure to please any appetite!

Cochinta pibil tacos are a type of taco that originated from the Yucatán Peninsula, dating back to the Mayan era. The dish was originally a stew.

These days, though, they are added to tacos!

It is made from pork that has been marinated in super acidic citrus, which gives it a distinct flavor.

The pork is cooked slowly over a fire and then shredded and placed on a tortilla. For the best taste, it’s usually served with salsa, onions, and cilantro.

Birria tacos are a very popular type of tacos. The meat is generally goat or lamb, and the dish originated in Jalisco.

There are many ways to enjoy this. The birria taco generally has a consommé-based broth, which allows you to dip your tacos into it.

Meanwhile, to make birria, the meat is often slow-cooked for hours to make it tender. It’s basically cooked until it can just come apart on its own. Birria will typically melt in your mouth.

The taco may also be served with onions, cilantro, and lime.

Tacos de mariscos are unique in Mexico City. Seafood tacos are a type of taco that comes in wide varieties, including fish, shrimp, and more.

Although these tacos originated in coastal areas, they are plentiful in Mexico City today.

The most common type of seafood taco is the fish taco, which is typically made with fried fish. Like many friend stuff, it can also have cabbage and sour cream, or even mayo-based sauce.

People like tacos for many different reasons. They are relatively easy to make, so they are convenient food to have on hand.

Tacos are also a very versatile food – they can be served as a main dish or as a side. A lot of people love the flexibility of this dish.

And, of course, tacos are a delicious way to enjoy many different kinds of food all in one bite.

Of course, some people have specific questions, and I’m here to answer them.

What does the word taco really mean?

Let’s start with a basic definition of this famous Mexican dish. Wanting to know its meaning is the first step to understanding it.

What does the word taco really mean? The word “taco” comes from a Náhuatl word that means “half.” In Náhuatl, the word is “tlahco.” This is the language of the Aztec people who lived in and around what is now Mexico City. Restaurants like Tlahco Mexiotl use the word.

Meanwhile, there are those who claim the word is actually foreign. They may refer to the word in Spanish, German, or other languages.

It could be the case that the word is borrowed. However, keep in mind that tacos are purely a Mexican invention, as I will answer in the next question.

Many years ago, while traveling in Spain, I overheard a conversation between American friends. One of them said that the Spanish tapas “looked like” tacos.

Are tacos Mexican? Tacos originated in Mexico. In fact, there is a lot of evidence now that pre-Columbian Mexicans used tacos, especially the Aztecs. The Aztecs were in what is now Central Mexico, and they were a corn-eating group of people. So, naturally, they made tortillas and tacos.

Like the Americans I overheard, many people assume tacos came from Spain. After all, don’t they look the same as tapas?

While the Spanish did bring a lot of ingredients into Mexico, the locals were already eating small meals on flatbread.

So, yes, tacos are pretty Mexican.

Is a taco a sandwich?

Tacos and sandwiches, what is the difference––they are all bread and yummy stuff. A little investigation will show the difference, though.

Is a taco a sandwich? Although both of them use similar things, a taco is not a sandwich. A sandwich requires a squeeze between two pieces of bread. This is different from tacos, which are more like wraps that don’t fully close. A taco is for holding ingredients together.

Tacos come with an edible plate called a tortilla. It can be flour or corn, although it’s mostly corn.

When fried, baked, or any other way tortillas are prepared, they are not tasty on their own. It’s the ingredients like meat, vegetables, and sauces that give the overall taco its taste.

People often wonder if tacos are healthy. It was certainly the first question I had, especially when seeing how oily the one I ordered was.

In other words, it depends on what goes into the taco. Some tacos like mariscos (seafood) can “look” healthy but may be fried.

One of my favorite tacos is a vegan taco, which is generally healthier. However, I’ve seen some vegan friend tacos that are super unhealthy!

So, it really just depends on how you make your tacos.

What is in taco seasoning?

Like many foods, tacos require several delicious ingredients to make them what it is. One of those is definitely seasoning, which gives it a special flavor.

In parts of Mexico, they add cumin, pepper, and even sea salt. You might even see coastal areas adding dried citrus ingredients.

So, it all depends on where you are!

How many calories are in tacos?

When some of us consider foods, we think about what they will do to our figures. For many weight-conscious people, knowing calories help.

How many calories in tacos? Although tacos come with different ingredients, the typical taco that has a corn tortilla hard shell, minced beef, cheese, and leafy vegetable has about 226 calories. The USDA uses that number when the taco is 3.5 ounces or 100 grams. Other ingredients increase calories.

Some ingredients that may increase the calories include if you use a flour-based tortilla. This alone can be around 285 calories.

Likewise, if you add an ounce of beans, it would add about 25 calories.

So, consider what ingredients to add to your tacos since it will increase the calories.

What to serve with tacos?

You’ve decided on having tacos for a dinner party. Now the only thing to figure out is what “else” to put on your menu.

What to serve with tacos? Some of the most popular items to serve alongside tacos include guacamole, frijoles, or refried black beans, salad, soup, or even rice. If the tacos are super spicy, having a nice guacamole will even things out. Sour cream works well with spicy tacos too.

In other words, before you decide to make the tacos, decide on the side dishes. Some side dishes, like black beans, are heavy.

Heavy side dishes might mean lighter tacos, for example. You don’t need both meat and beans, even though many people do.

For a balanced meal, consider protein, carbs, and grains as a unit that works together.

In conclusion, tacos are a delicious food everyone can enjoy. They are perfect for any occasion, whether you’re having a party or just want a quick meal.

Mexico City is the capital of the country, and it’s a great place to sample these delicious foods.

People love tacos because there are endless possibilities for toppings and fillings, so everyone can find a combination they love.

So next time you’re looking for a tasty treat in Mexico City, be sure to try a taco!