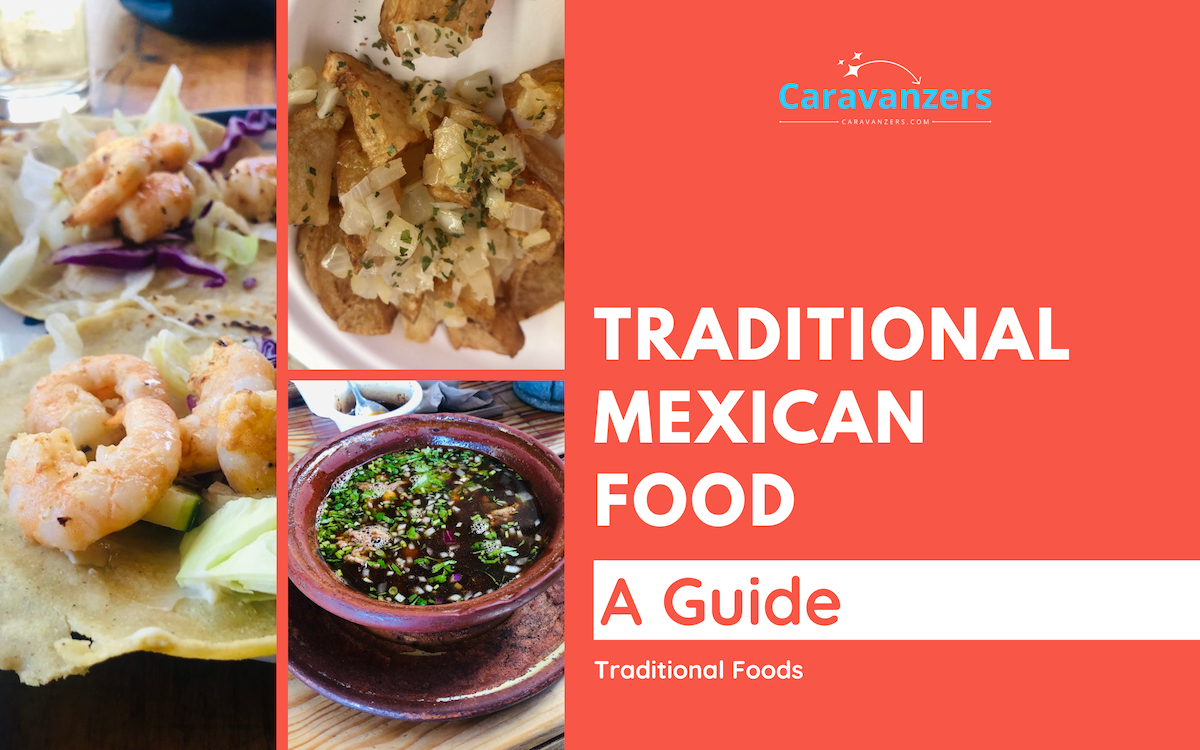 Traditional Mexican food has a long history. The cuisine comes from different regions, and some of the dishes are popular nationwide.

Although the most popular dishes include tacos and burritos, this guide will show you how there is a lot to choose from with this ancient cuisine.

First, I will tackle the history of Mexican food. Then I will present some traditional foods from different parts of the country. Finally, I will discuss some popular dishes.

The pre-historic influence is seen in the use of native ingredients like corn, beans, and chili peppers. Food from this period dates back thousands of years.

For example, some ethnic groups in Mexico, such as the Maya, Nahua, and Mixtec still have their own distinct foods from pre-historic times.

The Spanish influence is evident in the use of rice, beef, and pork. Ancient Mexican people weren’t really in touch with Asia the way Spain had.

Finally, the modern influence is seen in the use of international ingredients like certain spices or fast food items.

Traditional Mexican foods are regional, diverse, and evolving. While there are some staples that can be found throughout the country, each region has its own specialties.

For example, in the Yucatán Peninsula, you will find dishes like cochinita pibil, which is slow-roasted pork.

The Yucatán Peninsula is also famous for Mayan dishes like poc chuc, a type of grilled meat.

In the state of Veracruz, seafood is naturally plentiful since the state has the longest coast in the country. As a result, you will encounter dishes like arroz a la tumbada, which is seafood rice.

Another popular Veracruzan or jarocho dish is camarones al ajillo, which is shrimp in garlic sauce.

And in the mountainous regions of central Mexico, you will find hearty stews and soups like menudo, which is a tripe soup,

Another hearty soup from Central Mexico is the pozole, which is a pork and hominy soup. This dish comes from the Nahua people.

In Western Mexico, states like Jalisco have their own unique cuisine. For example, Jalisco is famous for its birria jalisciense, which is a dish made of goat meat.

In Southern Mexico, the Oaxacan cuisine is noteworthy. One of its famous dishes is chileajo de cerdo, which is made of pork and chilies.

There are many popular Mexican food items. One of the most popular, of course, is tacos. Tacos are made with a variety of fillings, including meat, cheese, and vegetables.

You can’t go a mile without seeing taco stands in most Mexican cities. They are just really popular.

What makes tacos popular is that they can be served with a variety of sauces, such as salsa or guacamole.

Burritos are another popular Mexican food. They are made with a flour tortilla and filled with meat, beans, and rice. Burritos can be served with sour cream and salsa.

So, the burrito is filling, which is probably why a lot of people like this dish.

Tamales are also very popular. This delicious dish is made from corn and usually has meat filings. It’s eaten on a wrapping that keeps the steam in place.

Another extremely popular dish is mole poblano. Mole Poblano is a traditional dish that originated in the state of Puebla.

The dish is served with a sauce that is made from a variety of different ingredients, including chocolate, chili peppers, and spices.

For breakfast, a lot of Mexicans like huevos rancheros, which are eggs made in a red sauce of tomatoes, chilies, and so on.

So, there are many popular Mexican foods. Some I didn’t cover here include enchiladas and quesadillas.

Mexico City is probably the one place where travelers can’t stop talking about its foods. There are many reasons why people visit Mexico City for food.

The city offers a wide variety of traditional Mexican restaurants, as well as fusion cuisine that combines Mexican ingredients with international flavors.

The city is also home to some of the best chefs in the world who create innovative and delicious dishes.

La Veracruzana Fonda de Mariscos is a great place for seafood. It celebrates Veracruzan cuisine. Find this restaurant at Calle de Chiapas 177A in Roma Norte.

Cochinita Country is all about Yucatán flavors. People go there to enjoy dishes from that region. The address is Angel Urraza 1503 in Letrán Valle.

Mexico City is a foodie paradise, and there is something for everyone to enjoy.

How to Eat Mexican Food

You can eat Mexican food in different ways. Like Indian food, Mexican yummies can be eaten with hands, depending on what you happen to eat.

In other words, eating with your hands is perfectly fine here. In fact, many Mexican restaurants will have a sink nearby for you to wash your hands before and after eating.

Meanwhile, you can use utensils to eat most Mexican dishes, especially soups, stews, and other gravy-based dishes.

Likewise, Mexicans use utensils when sharing food. For example, if you share birria, which comes with meat in a sauce that you roll on a tortilla. In this case, you would use utensils.

Of course, fast food is another type of food with which you can use your hands. Things like burgers, fried foods, etc.

Mexican food is a delicious and healthy option for anyone looking for something new to try.

There are many different types of traditional Mexican dishes, each with its own unique flavor.

Whether you’re looking for something spicy, sweet, or savory, there’s sure to be a dish that you’ll enjoy.

So next time you’re in the mood for something different, be sure to give Mexican food a try.

If you love Mexican food, you will love these websites:

>> Traditional Food – Mexican chef Pati Jinich knows a thing or two about her home country’s foods. For recipes and more, visit her website.

>> A Foreigner’s Mexican Food – Leslie is a self-described “gringa” (foreigner) and shares her love for Mexican food. Visit her blog.

>> Mexican Vegan – If you want to try some vegan, visit Dora’s Table.

Here are more articles for you: