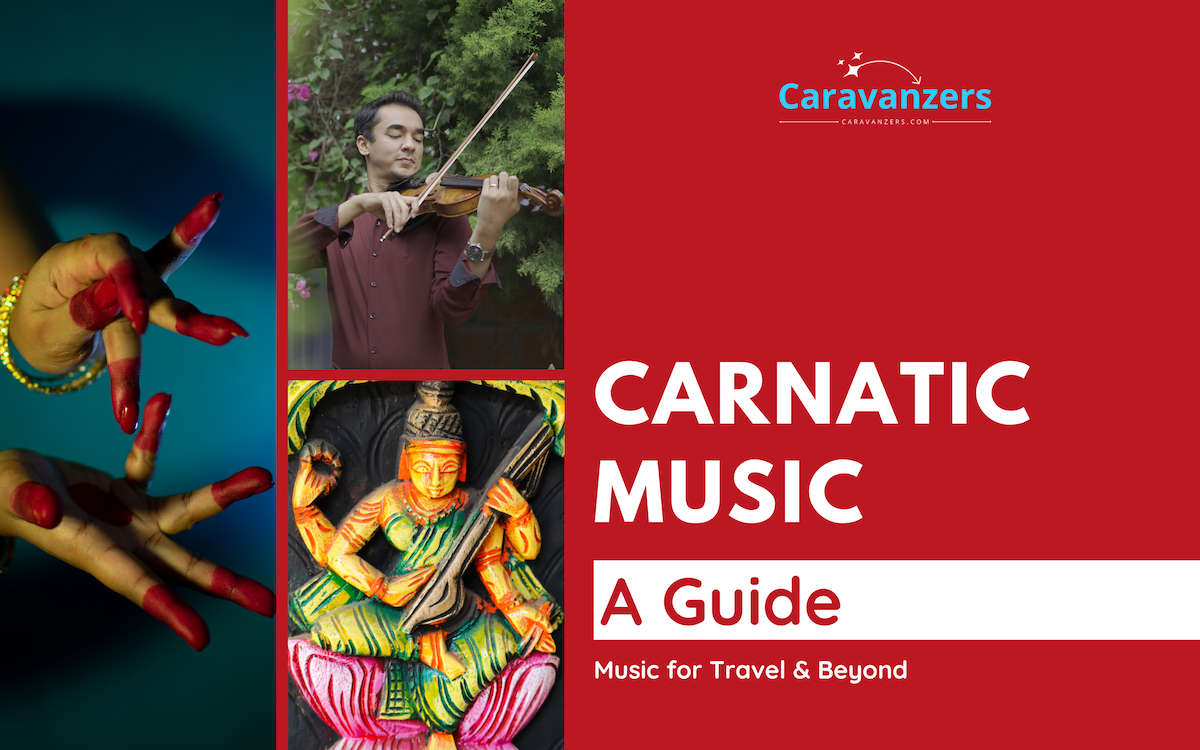 Carnatic music is a classical style of music from South India. It has a strong association with Hinduism, and many of the songs are devotional in nature.

Popular instruments include the veena, tamboori, and mridanga. Carnatic music is known for its complex rhythms and intricate melodies.

It is often performed in temples and at festivals.

Today, Carnatic music is integral to everyday life in South India. For example, this style shows up in all genres, including pop.

Let’s get to know Carnatic music!

India is predominantly Hindu. As a result, music in the country is closely associated with Hinduism.

In fact, Hindu deities are often depicted with instruments. A famous one is Krishna and his flute.

Meanwhile, the arrival of Islam in India contributed to a musical division from the 12th Century onward.

The northern regions of India began to introduce more and more Persian and Arab influences, and the southern regions retained more original styles.

With Muslim composers like Amir Khusrau (who died in Delhi in 1325 AD), northern regions drifted more and more from their Hindu origins.

Today, both of these musical styles are popular in the Indian Subcontinent, although each in its area.

Some modern artists mix the two. For example, Oscar-winning Indian musician A. R. Rahman is one of those.

Infusers like Rahman are, therefore, popular in both regions.

Why the Music is Called Carnatic

When people learn the name of this music, they usually end up asking about the meanings behind it. This is, of course, natural since it’s very different from its northern counterpart.

Why is it called Carnatic music? The word “Carnatic” and the word “Karnataka” are from the same roots. In major Indian languages, the phrase “Carnatic music” means “music from Karnataka.” Karnataka can mean “black region,” referring to the dark soil found in parts of South India like this state.

If a Hindi speaker wants to say “Carnatic music,” for example, they say “karnatak sangeet” (कर्नाटक संगीत). The phrase uses the same word as the Indian state name, karnatak (कर्नाटक).

In fact, that is how the name of the state of Karnataka came about. It was a name chosen in the 1970s to replace the old name of “Mysore” (this is a more foreign-imposed name).

In the Kannada language, “Karnataka” is called “karunadu” (ಕರುನಾಡು). However, this is an ancient Tamil phrase, meaning “black region.”

Even in modern Tamil, the state of Karnataka is called கருநாடகம் (Karunāṭakam), which literally means “Black Drama.”

Kannada is a dialect of ancient Tamil, much like modern Tamil and Malayalam. Along with other regional languages, ancient Tamil was part of the Dravidian languages of South India.

According to historians, all of South India was called “Karnataka Samrajya” or “Karnataka Empire,” dating back to the 1300s.

In that case, you could say “Carnatic Music” means “South Indian Music.”

Although Carnatic music is a form of classical music in general, it’s traditionally associated with the Hindu religion. Most of its historical songs are devotional in nature.

Many of the songs are about Hindu deities, and the music is often used as a way to worship these gods and goddesses.

Vyasaraya Tirtha composed the song in the 15th Century, celebrating Krishna, who is both the eighth avatar of Vishnu as well as the Supreme Lord.

The song is a call to invite Krishna into one’s heart and life.

Carnatic music is also seen as a way to connect with the divine, and it is often used as a form of meditation.

Speaking of Krishna, another popular Carnatic song is “Alaipayuthey Kanna” (அலைபாயுதே கண்ணா). This one is in the Tamil language.

Oothukkadu Venkata Kavi composed that song in the 18th Century.

This song, however, is a bit more meditative. The protagonist talks about having a restless mind, asking Krishna for calmness.

Finally, Hindu dancers use classical southern Indian types such as Bharatanatyam. Bharatanatyam is one of the eight Indian classical dance systems originating from the southern state of Tamil Nadu.

When a dancer starts a Bharatanatyam performance, no matter if they are in a temple or on a stage, he or she will start with pushpanjali. Pushpanjali is an offering to a god or goddess.

In other words, Carnatic music is an integral part of the Hindu experience in South India.

Carnatic music has many instruments, but some of the prominent ones include strings, winds, percussions, and vocals.

Some popular strings include the veena and tamboori. The veena is plucked, and the tamboori is bowed.

The mridanga and kanjira are good examples of percussion. Mridanga is a two-headed drum, and the kanjira is a frame drum.

The venu is a great example of wind instruments. The venu is the main traverse flute, and it’s typically made of bamboo.

Meanwhile, the body is used when musicians and dancers use feet or hands against objects, including the floor.

Sometimes the sound is to create solo items that emote an expression, and other times it’s to express something a non-human musical instrument can’t.

Of course, there are global instruments like the violin, too. However, the Indian violin is heavier than the western one.

If you wanted to, you could say that all of the music you find in South India has its roots in Carnatic style.

However, that wouldn’t really be fair.

South India is like any region in the world, and there are diverse musical styles, including non-Indian ones.

That said, what I think makes Indian classical music different is that they tend to be popular musicians, too!

Unlike many parts of the world, however, classical or traditional Indian music has huge pushers: live events, theater, television, and film.

On the other hand, K. S. Chithra is very well-known beyond Carnatic musical borders. Chithra is both a classical and popular singer. She has recorded over 25,000 songs, making her one of the most prolific musicians in the world.

Chithra’s voice shows up in mainstream films in languages like Tamil (her mother tongue), Kannada, Malayalam, Telugu, and Hindi.

For example, the 1995 film Bombay features Chithra singing in Tamil (the original language of the film), Telugu, and Hindi.

The “Bombay” soundtrack won top awards in India, has been included in many must-listen musical compilations and has been sampled by global artists.

In other words, Carnatic music is spread across a spectrum, and more vividly so than other classical music around the world.

Like many things in India, Carnatic music is rooted in families that have done what they do for generations.

Consider Ambi Subramaniam. He’s a noted Indian classical violinist who has played all over the world.

Carnatic music is in his blood, as his father and grandfather have all been classical violinists.

Likewise, his late mother and grandmother have been classical musicians, and they were both Carnatic and Hindustani trained.

His siblings, his stepmother, and a lot of cousins, uncles, and aunts are musicians.

In the Carnatic music tradition, it is very important to maintain a lineage of musical players. Families will often have multiple generations of musicians, with each new generation becoming more skilled at the craft.

This is because Carnatic music is passed down from teacher to student, and each new generation has the opportunity to learn from the previous one.

For example, Ambi is equally devoted to Indian and western music through his violin, whereas past generations, like his father and uncles, have been more traditional.

By keeping it in the family, it ensures that the quality of the music is maintained and that the traditions are kept alive.

As previously noted, Carnatic music is one of two genres of Indian classical music, the other being Hindustani.

Carnatic is the southern style and is characterized by its use of fixed compositions, which are often based on religious texts.

Although the music is often performed in a group setting, with the singer being accompanied by percussionists and melodic instrument players, these days, it permeates across all genres.

There are many reasons why people enjoy Carnatic music. The intricate melodies and rhythms are pleasing to the ear, and the music can be very emotive.

Carnatic music is also a very spiritual form of music, and many people find it calming and meditative.

This is also a very complex form of music, with different layers of meaning that can be explored.

I hope you explore all of the linked resources!

Check out more about India: