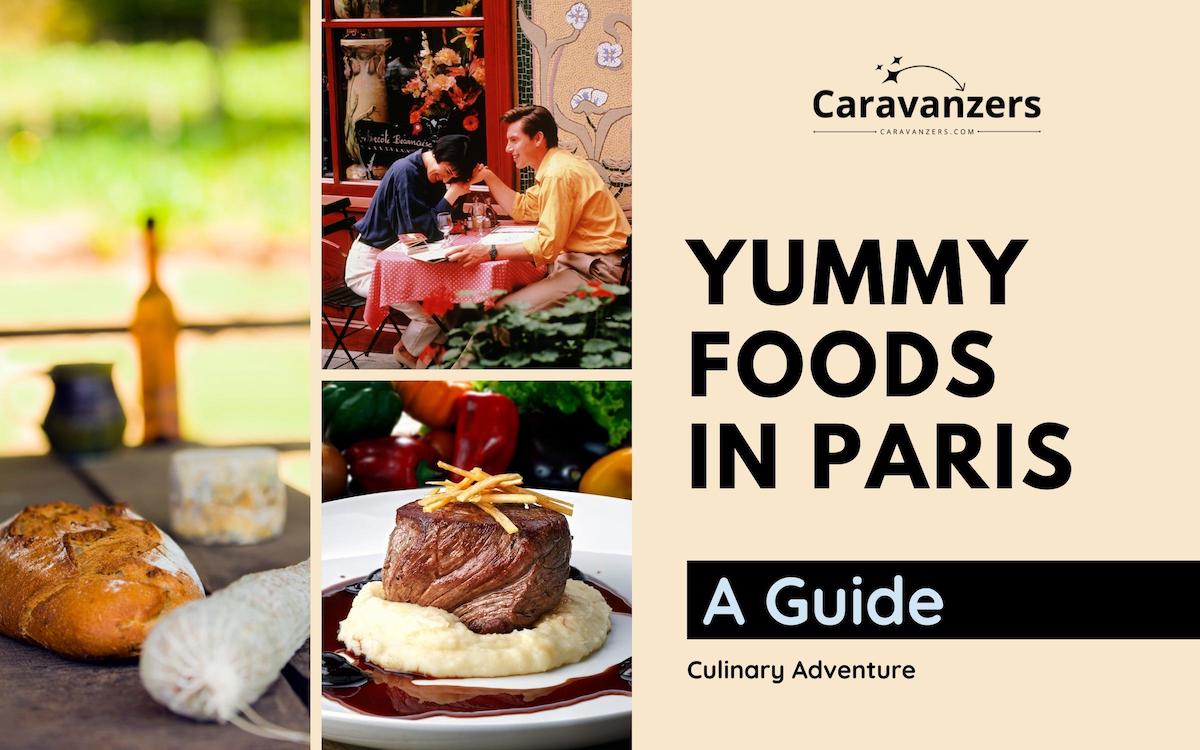 If you’re ever looking to enjoy a delicious French meal, you’ll want to check out foods in Paris. From traditional to global, it has it all.

Just understand that “French” is very diverse and includes foods from North Africa, among others.

France colonized a lot of countries that are now in the Francophone community.

Some of the people from these countries have been present in France for hundreds of years, which is why their foods have become very French.

So, what are some of the foods in Paris?

On top of that, some might include aperitif and digestive.

Of course, bread and various drinks, including wine, will be around the whole time. Wines, of course, change depending on what’s served and when.

A popular trend is to use a four-course meal. Each course is unique and contains a variety of ingredients. For example, the starter course might include a soup.

A soup course might contain chicken or vegetable broth along with different types of rice, noodles, or vegetables.

The main course will the soup. This might be seafood, red meat, or poultry.

The salad course might include different types of greens along with creamy sauces or dressings.

The cheese course might include different types of cheeses such as Brie or Camembert.

And the dessert course might include a variety of pastries, including cakes and pies.

If you’re in Paris and want to try a traditional French meal, try restaurants like Brasserie Flo in the 10th district, Chez Jenny Brasserie in the 3rd, Café de Flore in the 6th, or Café de la Paix in the 9th.

For North African French eateries, head to Chez Omar in the 3rd district or the Le Souk in the 11th district.

West African delights are all over the city, but I really love the Le Petit Dakar in the 3rd district and A La Banane Ivoirienne in the 11th.

Le Petit Dakar’s address is at 6 Rue Elzevir, and A La Banane Ivoirienne is at 10 Rue de la Forge Royale.

For some French island foods, check out île de la Réunion in the 14th district and the Moé Poké in the 8th.

For a starter meal, try pissaladiere. It’s like pizza but doesn’t have tomatoes. With a distinctly French taste of olives, onions, and anchovies, it will definitely wow you. Although from Nice, this delicious item is popular in Paris.

Foie gras is something totally not French but is super popular in Paris. It comes from duck liver, and the name means “fat liver,” which is the way they raise the birds. This dish comes from Ancient Egypt, but it’s a great starter.

“I found this to be a little heavy,” says Chen, from Taiwan. “However, the flavors make me not regret it at all.”

Bouchées à la reine is popular starter. This savory dish originates from nearby Versailles. Rumor has it that it that a queen named Marie Leszczyńska in the 18th century created it. It’s a pastry that has goodies in it.

For a North African starter, try harira soup. It’s usually with lentils and served with bits of boiled eggs.

If you happen to be at a West African spot, try the arachides grillées. They are grilled peanuts.

Nothing is more popular than canard au sang, which is a dish that originated in Paris. It’s prepared from pressing a duck with a special machine. Just don’t think about how it’s made.

Filet mignon is probably the most popular French main course outside of France, but it’s also popular here in Paris, too! There are at least a thousand ways to make it.

For a North African main course, try lamb tagine. This is a classic dish of lamb stew that often comes with couscous.

West African delicious main course is thieboudienne. This is a rice dish that’s comes with meat and vegetables.

Potage St. Germain is a savory dish from Saint-Germain-en-Laye, a commune in the same region as Paris.

Other Courses to Try

Generally speaking, this salad comes with potatoes and eggs on a bed of green vegetables.

Another course to try is the cheese one. You can get cheese from the region, something like the brie, which is from Seine-et-Marne. Seine-et-Marne is in the same region as Paris.

What makes foods in Paris unique is what makes the whole city what it is. This is a global city that has many cuisines, including its own regional one.

So, of course, the best thing to do is to try them all, right?

Love Paris? Check out these articles: